The Sleeping Nymph by Ilaria Tuti 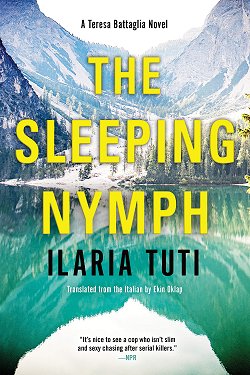 Superintendent Teresa Battaglia is pleased when a cold case lands on her desk because it means that there is no killer on the loose who must be tracked down as quickly as possible before more people die. She's not so pleased when her boss is temporarily replaced by a man from her past, a man who's determined to bring about her ruin.

As Battaglia and her team begin working the case, they find themselves in the Resia Valley, one of Italy's most isolated, untouched regions, and a place where the stories of the partisans who fought the Nazis during World War II have never gone out of fashion. When someone is brutally murdered, Battaglia finds herself not only battling a ruthless killer, but her own deteriorating physical and mental health. It's this crippling stress that could prove her downfall, but if anyone can emerge triumphant, it's Teresa Battaglia.

I was very impressed by the first book in this series, Flowers Over the Inferno, and I couldn't wait to see what sort of investigation Teresa Battaglia found herself dealing with next. Battaglia probably has the worst health of any main character I'm currently reading about-- she's in her mid-sixties, has diabetes and the first signs of Alzheimer's-- but she also has the greatest determination to survive and to succeed. Can you imagine trying to keep on top of a rapidly moving investigation while trying to remember whether or not you've given yourself your insulin... and while hoping against hope that your mind doesn't suddenly decide to go walkabout? The woman is so worried that she doesn't drive anywhere after dark, and she wears a bracelet that is inscribed with "My name is Teresa Battaglia." This woman has a will of iron, and maternal instincts any mother would envy. Battaglia feels that it is one of her most important duties to "shield the people who relied on her," and there's nothing her team wouldn't do for her as a result. Speaking of her team, I hope they figure more prominently in future books. I need to know more about them and why Battaglia feels that they need so much protection.

On the whole, I found the book to be bloated. There was too much going on: Teresa's health, the complicated personal life of her second-in-command Massimo Marini, her new supervisor who wants to destroy her, and learning all about the Resia Valley, an isolated region populated by people with a unique language, history, and customs. The mystery kept taking a backseat to everything else that was going on which became so frustrating that I began to wonder if characters like Albert Lona (the Teresa hater) were really necessary. At least my two favorite new characters, the blind Blanca Zago and her HRD (Human Remains Detection) dog, a scruffy mongrel named Smoky, played an important role in the mystery. I hope Blanca and Smoky appear in future books, especially since they are based on a real woman and dog.

The Sleeping Nymph suffered from what some have called "too much middle," but the mystery is absorbing, and it introduces two fascinating characters. With Teresa Battaglia's health conditions, this should be a short-lived series, and I don't intend to miss a single one of her investigations. You see, I have discovered that I'm just as loyal to her as the members of her team.

The Sleeping Nymph by Ilaria Tuti

Translated from the Italian by Ekin Oklap