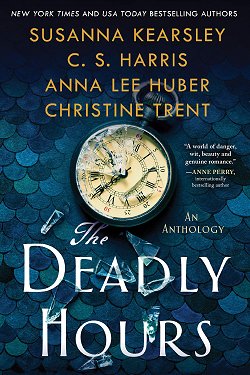 First Line: (from "Weapon of Choice") He would never tire of watching her sleep.

Four interconnected stories trace the journey of  a cursed and priceless watch from 1733 to 1944. From Italy to Scotland to England, the watch touches each of its owners with misfortune.

Readers first see the watch, called La Sirène by its French pirate owner, in Susanna Kearsley's "Weapon of Choice," my pick of the stories. The travels continue in 1831's Edinburgh in Anna Lee Huber's "In a Fevered Hour" then Christine Trent's "A Pocketful of Death" finds readers in the streets of London during a series of chilling murders. The anthology ends with C.S. Harris's "Siren's Call" in 1944.

The owners were told what needed to be done in order to break the curse, but you know what happens when someone possesses something rare, priceless, and beautiful. From the description of the timepiece, I would have had a difficult time parting with it myself.

I enjoyed seeing how these four authors took an idea and ran with it. The only thing I didn't particularly care for was the acknowledgments at the end of each story. They were repetitive and really intruded on the flow of the narrative. It would have been much better if they'd all been relegated to the end of the book.

The Deadly Hours by