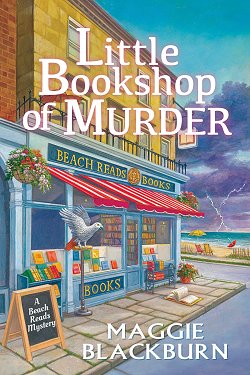 First Line: Summer Merriweather slipped off her flip-flops, allowing the sand's warmth to comfort the bottom of her feet like it had thousands of times before.

Shakespearean scholar Summer Merriweather has returned to Brigid's Island, North Carolina, to attend her mother's funeral, settle the estate, sell her mother's house and embarrassing romance-themed bookstore, Beach Reads, and get back to her real life. But when she stops by the bookstore and discovers threatening notes that were sent to her mother saying, "Sell the bookstore or die," she knows there's something rotten going on, and it must be dealt with.

Was Summer's mother murdered? The police don't want to hear about it, so Summer and her Aunt Agatha start their own investigation with the help of the Beach Reads book club. What Summer didn't realize is just how long the list of suspects is.

The groundwork has been laid for a very interesting second book in this new Beach Reads cozy series, and I am tempted to read it, which is somewhat of a miracle since I spent most of Little Bookshop of Murder greatly disliking the main character.

Summer is a hoity-toity Shakespearean scholar who's much too good for her mother's taste in "worthless" romance novels, no matter how popular or essential the bookstore has become to so many people. She's so scared of spiders that she sleeps with a special blanket and a mask that's supposed to cover all facial orifices so no eight-legged beasties can get in. This young woman has to be exhausted because she's spent her entire life rebelling against her mother, Hildy, and everything Hildy stands for. And may I also say that I thought Summer shows absolutely no class in wearing flip-flops to her mother's funeral? Maybe it's just me.

If we're talking characters in this book, my favorite is Mr. Darcy, Hildy's old African grey parrot. I wouldn't mind giving him a new home no matter how many feathers the old bird sheds. As for the mystery? Little Bookshop of Murder isn't a whodunit, the killer is rather obvious from the start. No, this is a why-dunit, and I've often found that deducing why someone is killing people is much more interesting than the person's identity.

Since some of Summer's quirks are explained and resolved, and since the author has set up book two so well, I'll probably be visiting Brigid's Island again. But I'm giving her fair warning: give up that literary snob business. You're much better than that, woman.