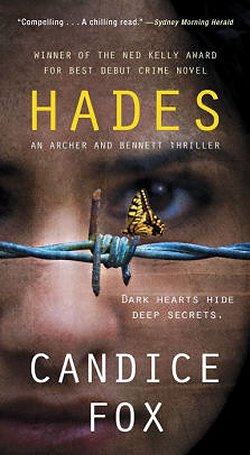 First Line: As soon as the stranger set the bundle on the floor, Hades could tell it was the body of a child.

Homicide detective Frank Bennett is the new kid on the block, and he doesn't really know what to make of his new partner and her brother who is also on the Sydney police force. Eden is beautiful, intelligent, cold, efficient, and very, very distant. Her brother, Eric, is a monumental pain in the neck who thrives on trying to make Frank's life a misery.

But when a large underwater graveyard filled with large steel toolboxes is discovered, all the attention rightfully shifts to finding the killer. For Eden and Eric, the investigation takes them back to their traumatic childhood and the murderer who raised them. For Frank, the case is going to bring him face to face with evil... and the knowledge that no one is truly innocent.

I've been aware of author Candice Fox for a while now but had never read one of her books. When a fellow reader mentioned this series of books featuring Sydney, Australia, homicide detectives Eden Archer and Frank Bennett, I decided to try it out with this first book. I enjoy reading Australian crime fiction, and although there isn't much Aussie flavor to Fox's story, the occasional mention of frangipani trees and flying foxes napping in fig trees were enough to transport my mind's eye to the land down under.

What Fox really excelled in as far as Hades' setting goes is her chilling descriptions of two of the serial killer's body dump sites. Although neither graphic nor gruesome, those descriptions made my blood run cold. I really love it when writers can make me break out in goosebumps without drowning scenes in buckets of gore.

It took me a long time to warm up to Frank Bennett, the man who tells us what's going on. He's needy. He becomes fascinated with Eden, originally because she's so pretty (yawn) but then the fascination grows when he realizes that there's something not quite right about Eden and her brother Eric. It took time, but I did warm up to Bennett finally when I learned about his relationship with an elderly man after chasing a burglar out of the man's house. That was the tipping point for me.

There were a couple of secondary characters whose deaths were inevitable, and I did find the serial killer (dubbed "The Body Snatcher" by the media) to be over the top and not really believable, but the linchpin of Hades is Eden Archer. When she was five, she and her brother were kidnapped, left for dead, and then raised by a fixer-- a killer for hire who "fixed" other criminals' problems. When Hades realizes what young Eden and Eric are doing in their spare time, he ensures that the two will use their skills only for good, and in this, it's impossible not to compare Eden Archer to Jeff Lindsay's Dexter. This comparison has everything to do with my reaction to this book.

I read the first Dexter Morgan book, Darkly Dreaming Dexter, and appreciated the author's originality and writing style. I thought it was a well-written, absorbing book. But. (You knew that was coming, didn't you?) I never read another book in the series. There's something about someone taking the law into his or her own hands that offends me even when the person is taking vicious criminals off the streets permanently. Consequently, I have the same problem with Eden Archer, and although I did find the story compelling, I'm satisfied with reading just one. The good news is that I have the first book in Candice Fox's other series waiting to be read. I look forward to Crimson Lake because one thing I know for sure is that I like the way this author writes.