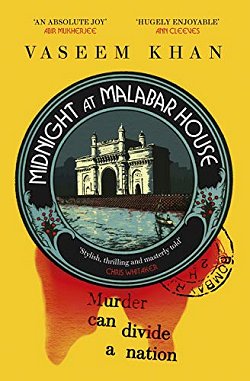 First Line: The call came in the deepest part of the night, the telephone's lusty urgency shattering the basement silence.

Bombay, New Year's Eve, 1949. India is at the threshold of a momentous new decade, a country looking to the future and wanting to put all memories of the bloody Partition behind it. Inspector Persis Wadia, India's first female police officer, is working the night shift at Malabar House, home to the city's most unwanted unit of police officers. She is mistrusted, sidelined, and consigned to the midnight shift.

Then the phone rings, and the murder of a prominent English diplomat-- the country's most sensational case-- falls right into her lap. Persis has this one chance to prove how good she is, and she is determined to succeed, regardless of the cost.

I love Vaseem Khan's Baby Ganesh mystery series set in Mumbai, and I was eager to see what he could do with a historical mystery, especially one involving the first female police officer in India. Midnight at Malabar House introduces a character and a time period that I have to know more about.

The horrors of the 1947 Partition loom large in this book, as they should considering the time in which it is set. The Partition was so momentous that its aftershocks are still being felt today, and the author talks about this a bit at the end of the book.

The mystery here is deeply satisfying, but it is the character of Persis Wadia that holds center stage and refuses to turn loose. She is paired with Scotland Yard criminalist Archie Blackfinch, a relationship that should continue to prove increasingly interesting as the series progresses. Persis's wheelchair-bound father, Sam, owns a well-known bookshop in Bombay, and this is where Persis has grown up-- now with ever more frustrating visits from her Auntie Nussie who's determined to get Persis married off and away from all this police nonsense.

The main thing that makes Persis such a fascinating character is her ironclad sense of morality, her belief in the new India, and her youth. She has the pig-headed righteousness of youth, convinced that she's always right, convinced that her way is the moral-- and only-- way. She doesn't have a frivolous molecule in her body, and she certainly didn't inherit a humor gene. Persis could be an obnoxious character, but she's not. Her naïveté means that it never occurs to her that the reason why those powerful government men are content to let her head the investigation is because they are convinced that she's incapable of solving it. She's a mere woman after all! As she flings herself at one obstacle after another, we see that some of those sharp edges of hers are going to be worn down with time.

I am looking forward to watching Persis Wadia mature as a human and as a police officer, and I look forward to Vaseem Khan's next book in the series with a great deal of anticipation. For those of you who are familiar with Sujata Massey's excellent Perveen Mistry historical series, give Midnight at Malabar House a try. I think you're going to like it.