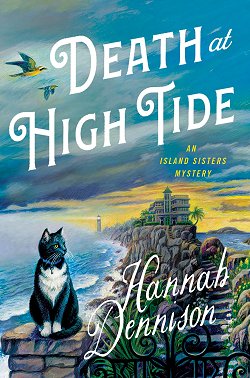 First Line: "I'm sorry, but I don't understand what you mean."
After Evie Mead's beloved husband drops dead of a heart attack, she learns that she may own the rights to a hotel on one of the Isles of Scilly. Grief-stricken, she's quite content to leave the matter in the hands of the accountant, but her sister Margot, who's flown in from Los Angeles, envisions a luxurious weekend getaway and promptly books two one-way tickets to Tregarrick Rock. In its heyday, the Tregarrick Rock Hotel was the home-away-from-home for many Golden Age mystery writers, but now it's a fixer-upper, definitely not a spa. The hotel employees and island residents are more obstructive than helpful, and frustration soon turns to desperation when dire things begin to happen. Evie and Margot are stuck there, unable to leave due to weather and high tides, and since they are the unwelcome newcomers, they are suspects one and two in the crimes that have occurred. It's up to them to unravel the mystery so they can leave Tregarrick Rock in one piece.
I enjoy Hannah Dennison's writing, especially her Honeychurch Hall series, but my reaction to Death at High Tide was decidedly lukewarm. The setting is perfect, and a lot can be done with the tired old hotel, but the problems arose in both plot and characterization.
Whodunit was altogether too easy to deduce. I had strong suspicions the first time a character was introduced, and I was certain I was right shortly thereafter. That always takes some of the sparkle out of the proceedings. However, there were some excellent red herrings and damsel in distress segments.
Then there were the characters. Detective Sergeant Patricia Williamson didn't set well with me. I found her sense of humor difficult to fathom, and most of the time she seemed more interested in her latest date than in doing any sort of policing. Evie was much too timid, and I don't think the reasons why can all be laid at the feet of grief. My reaction to Evie's sister Margot was swift and sure. For much of the book, she's a diva-- a type of person I have very little use for. For a weekend getaway she packs enough designer labels for a two-month stay. When warned about the swiftness of the tide and the difficulty of getting to Tregarrick Rock, she purposely drags her feet and takes as long as possible to do what she needs to do. And she's the sort who needs a four-member Beck-and-Call Staff to do her bidding. By book's end, the detective sergeant and Margot have changed a bit, but will it be enough for me?
The jury's still out and probably will be until the next book in the series makes its appearance.
Death at High Tide by Hannah Dennison
eISBN: 9781250194497
Minotaur Books © 2020
eBook, 304 pages