Murder in Chianti by Camilla Trinchieri 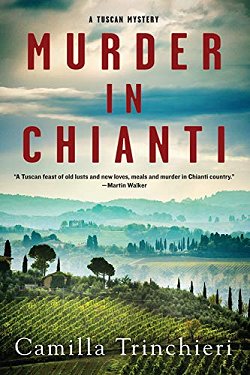 First Lines: Monday, 5:13 a.m. The sun wouldn't show up for at least another hour, but Nico got out of bed, shrugged on a T-shirt, pulled on a pair of shorts and socks, and laced up his sneakers.
Former NYPD homicide detective Nico Doyle has moved to the village of Gravigna in the heart of Tuscany. Still mourning the death of his wife, Nico is getting by with the help of Rita's relatives, but he still feels out of place. That all begins to change one morning when he's getting ready for his daily run. Hearing a gunshot and the barks of a dog, Nico discovers a body in the nearby woods.
When the investigating policeman, Maresciallo Salvatore Perillo, finds out about Nico's background, he insists on Nico's help. Discovering the dead man's identity takes a bit of time, but once it's known, Nico and Perillo learn that more than one person in this corner of Italy knew the victim. Nico has a small pool of suspects-- including his own in-laws--and finding the killer means that he's going to have to dig up every last one of their secrets in order to get to the truth.
Even though the mystery seemed to take a backseat from time to time in Murder in Chianti, I didn't really mind because this first Tuscan mystery reminds me very strongly of Martin Walker's Bruno Chief of Police series set in southwestern France.
Just what does that mean? Lots of mouth-watering food (I'm going to try my hand at making "stingy spaghetti"), getting to know the townspeople of the village of Gravigna, a very interesting main character, and a puzzling mystery to solve.
Nico Doyle has a backstory that, once uncovered, explains so much about his character. He is a man who believes in justice, but he also has a great deal of empathy for victims. He's a man who can't turn away a stray dog he names "OneWag," and he experiments with various recipes in his kitchen with some of his food being served in the family restaurant where he works a few hours per week.
The local maresciallo, Salvatore Perillo, is also a strong character. He grew up in the south of Italy, so in his own way, he is out of place in Tuscany, too. His partner is a young man, Daniele, who learns a lot during the investigation while contributing good ideas of his own. Being so young, he feels that his two biggest problems are being without a girlfriend and having the misfortune of blushing at the drop of a hat (even when he's not embarrassed about anything). Ah, the young!
If you're a fan of Martin Walker's series, expand your reading range to include Tuscany. I really think you'll enjoy Murder in Chianti. If you're not acquainted with Bruno Chief of Police, try Trinchieri's book anyway. You're going to love Tuscany, love the food, love the characters, and love solving this mystery.
Murder in Chianti by Camilla Trinchieri
eISBN: 9781641291804
Soho Press © 2020
eBook, 312 pages
Police Procedural, #1 Tuscan mystery
Rating: A-
Source: Net Galley
by Cathy at Monday, July 06, 2020