Snowed Under by Mary Feliz 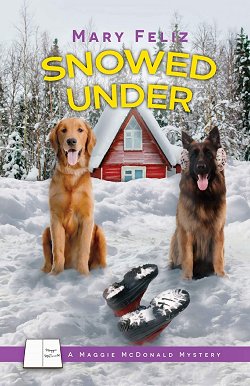 First Line: The scene was like every description of a near-death experience I'd ever heard.
Professional organizer Maggie McDonald's best friend Tess has asked for her help in getting Tess's Lake Tahoe cabin ready for sale. After white-knuckle driving for hours in a blizzard, little did Maggie know that the first thing she would do once they'd arrived is stumble over a dead body in a snow drift.
The dead body is Dev Bailey, Tess's neighbor, who disappeared two months ago. As the snow continues to fall and Maggie becomes acquainted with Tess's neighbors in the cul-de-sac, the suspect list grows-- and so does the danger.
Snowed Under is another enjoyable outing for Mary Feliz's Maggie McDonald-- even though Maggie never seems to get much organizing done. Lake Tahoe is one of the most beautiful places I've ever seen, so I loved the setting-- and I loved that I wasn't actually there because snow and I do not get along. (It's much better to read about it than live in it.)
If you like reading cozy mysteries in which the main character as well as her family and friends are good people who use their common sense and intelligence, then this entire series is the one for you. It is so refreshing to read about people who don't go haring off on wild goose chases regardless of the danger, and-- speaking of refreshing-- it's great to have police who are willing to listen and work with ordinary citizens in the areas they protect. So... that explodes two tenents of so many cozy mystery series: the heroes thoughtlessly putting themselves in danger, and stupid, obstructive policemen. Mary Feliz proves that it can be done and done well.
If you think that this sounds like the makings of a boring mystery, think again. In Snowed Under, I didn't have a clue what was going on until one of the characters began to open up a little. An added bonus was watching everyone in the neighborhood work together to make sure they were all safe as one blizzard after another hit the area.
I don't know about you, but I certainly was in the mood for an intriguing mystery that involved good people doing the right thing. If you're not already a fan, you've got an entire feel-good series to savor. Me? Now I have to wait for the next one.
Snowed Under by Mary Feliz
eISBN: 9781516105281
Lyrical Underground © 2020
eBook, 250 pages
Cozy Mystery, #6 Maggie McDonald mystery
Rating: B+
Source: Net Galley
by Cathy at Monday, June 08, 2020