Murder in a Scottish Shire by Traci Hall 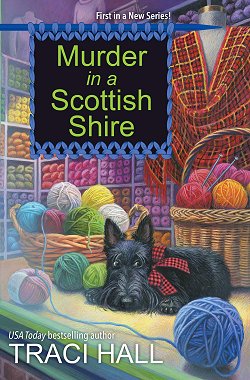 First Line: Paislee Shaw eyed the clock above the cooker as if Father Time were her mortal enemy.
It's a sensible life for twenty-eight-year-old single mother Paislee Shaw, her ten-year-old son Brody, and their Scottish terrier, Wallace. Her dear departed grandmother taught her how to knit, and since Paislee certainly has a knack for the craft and is blessed with more than her share of determination, she is now the proud owner of Cashmere Crush, a yarn and specialty sweater shop in Nairn, a picturesque village and tourist destination on the north coast of Scotland.
Recently though, Paislee feels that her life is coming unraveled. She's been served with an eviction notice, and her estranged and homeless grandfather has been brought to her door and is now living with her. That would be more than enough to deal with, but Paislee also discovered the body of a young woman she'd rehired to help her in the shop. The details of the woman's death just don't add up, and before she knows it, Paislee is helping handsome Detective Inspector Mack Zeffer solve a murder.
I love Scotland. I'm familiar with the book's setting of Nairn. I love to knit. I certainly love mysteries. Traci Hall's Murder in a Scottish Shire was a no-brainer for me to pick up, and I'm delighted to admit that I was surprised by just how much I enjoyed this cozy mystery.
Hall is better known for her romance novels, which is one genre that I avoid like the plague. She's set up her main character with a couple of romantic prospects, but so far Paislee is standing firm: Brody is her primary concern until he's old enough to be on his own. With the possibility of a romantic triangle reminiscent of Janet Evanovich's Stephanie Plum, this is a situation I will be monitoring closely, but in the mean time, I went along for the ride and enjoyed every minute of the story.
With characters like Paislee, young Brody, cantankerous Grandpa Angus, and best friend Lydia, Hall's strong, well-paced mystery unfolds smoothly, and a few unknotted threads at the end certainly make me anticipate the next book. Can the author avoid diving headlong into a sea of romance? I enjoyed Murder in a Scottish Shire so much that I certainly intend to find out.
Murder in a Scottish Shire by Traci Hall
eISBN: 9781496726001
Kensington Books © 2020
eBook, 304 pages
Cozy Mystery, #1 Scottish Shire mystery
Rating: A
Source: Net Galley
by Cathy at Tuesday, June 30, 2020