The Shooting at Château Rock by Martin Walker 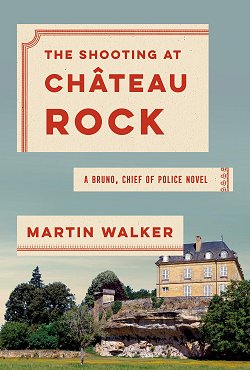 First Line: Two days after his father's funeral, a distraught Gaston Driant came to the mairie of St. Denis, asking to see Bruno Courrèges, the town's chief of police.

When the heirs of a Périgordian sheep farmer discover that they've been disinherited, they turn to Bruno Courrèges for help. Bruno, the chief of police of the town of St. Denis, agrees that there's something fishy about their father signing over everything he has to an insurance company in return for a policy that will place him in a five-star retirement home for the rest of his life-- and when Bruno learns that the man died shortly after signing all the paperwork, he definitely knows something is wrong.

As Bruno digs deeper, he learns that the insurance company is owned by a Russian oligarch whose daughter just happens to be staying in the nearby château of an aging rock star. Things begin to heat up quickly in Bruno's investigation, but there's still plenty of time for a mouth-watering meal or two with his friends.

Martin Walker skillfully weaves so much information about France and Europe in general into The Shooting at Château Rock that, after I'd finished reading the book, it took a while for my mind to leave the Périgord. This book is about so much more than the fleecing of the elderly. Readers learn that although Europe knows that Russian criminals and oligarchs are moving into their countries, getting passports from places like Malta and Cyprus in an effort to hide their true Russian citizenship, they still have to tread carefully since half of Europe is dependent on Russian gas. I also learned that drones are being used to video opulent properties when they're being placed on the real estate market for sale. (How the other half lives, eh?)

No matter how hard Bruno works to track down the bad guys, there's still plenty of interaction with his friends, and-- let's face it-- that's what most Bruno fans eagerly await in each new book. There are several delicious meals lovingly described in The Shooting at Château Rock, and I loved the addition of music to the storyline. Bruno's young Basset hound, Balzac, also gets his turn in the spotlight.

You can't have a new book in the series without dealing with Bruno's love life. Fans know that his penchant for strong, independent women means that he hasn't found the right one who wants to settle down and raise a family with him. Here he seems to be nudged in a direction that I'd wondered about myself. Only time will tell what's in store for our favorite French policeman.

During the course of this series, Walker has shown us how the various law enforcement agencies work in France, and it's a fascinating glimpse into how another country protects its citizens. But Bruno does wonder-- as I sometimes do-- if there's still room for the human factor amidst all the technology and the massive amounts of data it can uncover. After all, most of Bruno's success is based on the fact that he knows most of the citizens in his area-- and they know and trust him.

Fans of this series should love The Shooting at Château Rock. If you're new to the series, I'm going to admit that you could read this book and not feel lost... but don't be surprised if you find yourself going back to read the rest of the books. They are quite the delectable feast.