The Secrets of Bones by Kylie Logan 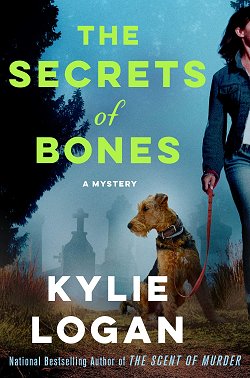 First Line: Wally the puppy was a nineteen-pound ball of boundless energy with more sass than a three-year-old kid, and more common sense than one, too.

When St. Catherine's has a no-show at Assembly Day, the Catholic school for girls is short one professional woman to talk about possible career choices. Employee Jazz Ramsey is persuaded to bring in a cadaver dog and talk to the students about the dog's training, which will include planting bones for Gus the dog to find.

The girls are impressed when Gus finds the first bone, but instead of finding the second, Gus heads in a completely different direction. Since he is a professional, Jazz takes a look and finds the skeleton of a  woman who used to teach at the school-- one whom everyone thought had resigned and left.

Bernadette was a controversial teacher, and as Jazz tries to find her killer, she realizes that there are plenty of people who wished her ill. The trick will be to find the killer before the killer becomes nervous and tries to stop Jazz in her tracks.

The first book in this series, The Scent of Murder, showed a lot of promise, and this second entry certainly begins fulfilling a lot of that. Jazz has learned a better way to question her suspects (in the first book she tended to infuriate everyone which is dangerous), and her relationship with a local detective aids in her investigation. There's the usual cop who poo-poos everything she says, but he's not obnoxious to the point where I wanted someone to run him down with a patrol car. (I take out any latent aggression in the fiction I read.)

Logan has a main character with a voice that captures my attention and won't let it go. In The Secrets of Bones, she's also crafted an excellent mystery that kept me guessing all the way to the reveal. I'm definitely looking forward to the next book, although this author stomps all over one of my pet peeves.

Cozy mysteries usually have some sort of "hook" to capture a reader's attention and make them pick up and read the book. When Logan once again fell hook, line, and sinker for one of my peeves, I had to look up two things. One was my reading history with this author. She's written several series, and I've read books in two of her others. One button shop series I picked up because I love buttons. Yes, there was some information about buttons at the beginning of the book, but if they showed up again it was because someone threw all the buttons on the floor and the main character had to pick them up. Buttons were the hook that was quickly dropped after the beginning of the book.

The second thing I had to look up was more information about the literary or narrative hook: "It appears at the beginning of the story and may contain several pages of a novel, several paragraphs of a short story, or it might be only an opening sentence..."  So I learned that my expectations were rather high, and Logan is following the letter of the literary hook law. But... my expectations are still high. If this series is supposed to be about a woman who trains cadaver dogs, may we please have more than a couple of pages about the process? Pretty please?

Will I read the next book in the series? I've already said yes because I do like the main character and the mystery was excellent. I just wish I could train myself not to be so annoyed when hooks don't last as long as I want them to!