The Queen's Secret by Karen Harper 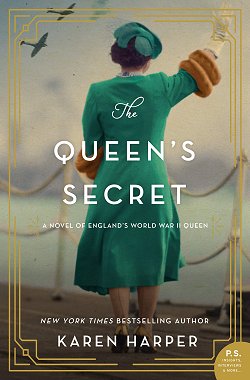 First Line: After all the grand celebrations leading to my one-hundredth birthday, I had feared dreadfully that the calendar day itself would be a disappointment.

Karen Harper's historical novel, The Queen's Secret, begins with Elizabeth the Queen Mother about to attend one of the many celebrations for her one-hundredth birthday, but it focuses on the World War II years when she and her husband King George VI were the public faces of Great Britain. Their home was bombed; they, too, were trying to keep their children safe; they lived with the same rationing as their people; and as they visited devastated areas of London and spoke to the residents, they epitomized "Keep Calm and Carry On." They boosted their people's spirits and helped them endure untold grief and hardship.

I had to read this novel because of my English husband's fondness for "the Queen Mum." (He'd also had the opportunity to meet her more than once.) In reading The Queen's Secret, I wasn't the slightest bit surprised by the information Harper shared about Edward VIII and Wallis Simpson. Great Britain was fortunate to dodge the lethal bullet that would have been their reign. What surprised me was the number of secrets that Elizabeth had to keep, and almost all of them were substantiated when I did a little research.

The story unfolds steadily and really gives readers an insider's feel for life in the royal household during World War II. Each character has his or her own distinct personality, but-- as it should be-- Elizabeth the Queen Mother shines the brightest, this plump, rather dowdy-looking woman whom Hitler called the most dangerous woman in Europe. She had a backbone of steel, a loving heart, and a sharp mind. King George VI and Winston Churchill appreciated this woman's gifts, and now I understand why she was so beloved. What a woman!