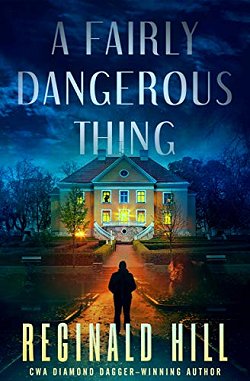 First Line: Joe stood, dramatically outlined against the sky, on a rocky eminence above the Bosporus, and laughed mockingly as Cyril Solstice and Miss Onions were bound back to back (no; make that front to front, nothing was too bad for them) thrust into a sack and hurled into the swirling waters.

Joe Askern, teacher in an English village day school, has three obsessions: (1) concocting dire scenarios in which to put the two people in charge of the school, (2) Averningerett House, a stately home, and (3) female mammary glands. With the aid of a particularly hopeless student and the student's father, Joe is set up to learn just what can happen when obsessions collide.

In no time at all, Joe finds himself blackmailed into being a participant in the master heist of Averningerett House. Unable to finagle his way out of the mess, Joe agrees to navigate the caper. What none of them know is that it's going to be much more difficult getting out of the house than it was to get in.

Since I am a fan of Reginald Hill's Dalziel & Pascoe police procedural series as well as his standalone, The Woodcutter, I thought I'd enjoy A Fairly Dangerous Thing. For the most part, I didn't. What part did I enjoy? The caper itself. I've always liked a good heist/caper book or film, and Hill's book fulfilled this particular requirement.

What didn't I enjoy? Once, just once, I'd like to see someone who's being blackmailed say, "Damn the consequences, I'm turning these buzzards in!" I know. Then there wouldn't be much of a book. (It would, however, be quite refreshing.) I found Joe's dithering-- which only wrapped him tighter in the blackmailer's web-- tiresome, and even more wearying was his almost open drooling over women's breasts. Put a good-sized pair in front of certain men and you can do anything you want with them. But guess what? It's boring. Dolly Parton isn't the only woman who's happy that Dolly Parton jokes are a thing of the past.

So... a very good heist story involving an exasperating main character. Written by almost anyone else, I would not have finished it. Of course, your mileage may vary.