A Casualty of War by Charles Todd 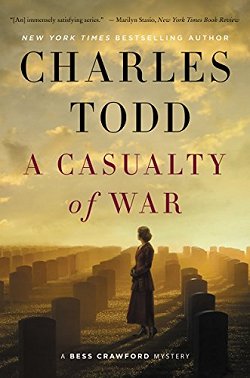 First Line: Lieutenant Morrison died as dawn broke on that Friday morning, a casualty of war.

Although World War I is nearing its end, Bess Crawford would never guess it by the pounding of the guns and the steady stream of the wounded to the forward aid station where she is a nurse. She meets Captain Alan Travis while waiting for transportation to her new post, and when he's brought into her aid station with a head wound, she's alarmed that Travis believes he was shot by his English cousin. When Travis is brought back with a more severe wound, once again he denounces his cousin. When it becomes apparent that his cousin could not be the person trying to kill him, Travis's sanity is in question-- and Bess wonders how such an experienced officer could be so wrong.

On leave in England, Bess visits Travis in a hospital for soldiers suffering from a variety of brain injuries. Finding him strapped to a bed in a room with no windows, she is horrified at his condition and, along with Sergeant Major Brandon, she travels to Travis's cousin's ancestral home in Suffolk to learn more about the relationship between these two men. As a result, Bess and Brandon are going to find themselves right in the middle of danger.

I have a longheld fascination for all things World War I, and after reading Lyn MacDonald's excellent The Roses of No Man's Land, I've found myself reading both fiction and nonfiction about the women who went to France and Belgium to nurse the wounded. Charles Todd's mysteries about Bess Crawford are very good, and A Casualty of War is no exception, although I would imagine that Bess's parents are sick of her solving mysteries instead of spending time with them on her infrequent leaves home in England.

The chaos of trench warfare is a fertile ground for mysteries, and the mystery in A Casualty of War is intriguing indeed. How and why would Captain Travis's cousin want to kill him... if indeed it was him in the first place? Why are the people of the village of Sinclair so hostile to Bess? There are many questions to answer, and it's fun to attempt to find answers for them all before Bess does.

Another reason why this series is so strong is that the writing team of Charles Todd does an excellent job of giving readers a real feel for the time, the attitudes of people from all walks of life, and what it was like to be a nurse at the front lines. When the end of the war is announced, Bess, the other nurses, the doctors, the soldiers all experience a feeling of relief, but also a sort of disbelief. They've been fighting for so long, and when Bess goes to England, it's plain to see that everyone will have many adjustments to make. Things aren't going to go back to normal. At least, no time soon.

I like the character of Bess. I like seeing how she feels about people and the lengths to which she'll go to do what's right for them. There's also the added fillip of possible romance when Bess and Brandon spend a great deal of time in each other's company.

If you like reading books with a strong female main character who solves intriguing mysteries set in a well-researched time period, I recommend Charles Todd's Bess Crawford series. They. Are. Good.