The Fragility of Bodies by Sergio Olguín 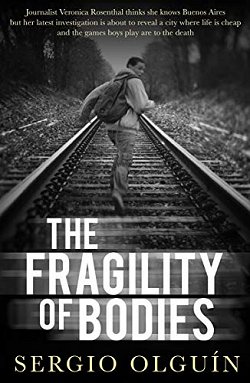 First Line: The building was at least eighty years old.

Journalist  Verónica Rosenthal smells a story when she hears about the suicide of a Buenos Aires train driver who left a note confessing to four mortal "accidents" on the tracks. For the police, the case is closed. Suicide is suicide after all. But for Verónica, her investigation leads her into an unfamiliar world of abject poverty, crime-infested neighborhoods, and train drivers on commuter lines haunted by the memory of bodies hit at speed by their locomotives in the middle of the night.

She receives help from a train driver, a junkie in rehab, and two street kids willing to risk everything for a can of Coke, and she soon learns that there is a group of men betting on these youngsters who have been convinced to play Russian roulette by seeing who can stand the longest in front of a fast-moving train.

I haven't had the best of luck in finding crime fiction written by South American writers that holds my attention. I don't know if my problem lies in the translations or some other factor. I'm happy to say that my luck has changed with Olguín's The Fragility of Bodies.

The story is a strong draw. I've read books and seen television and films that have someone hit by a train, but there's seldom ever any focus on the driver of the train. This book tells you what happens to the drivers when they hit a person on the tracks. I appreciated that; however, the entire storyline of betting on children playing railroad Russian roulette, who's behind it, who's grooming the children, who's betting on it-- this grabbed my attention and wouldn't let it go.

The point of view changes from Verónica to her train driver lover to two children being enticed to participate in the "game" to a junkie who's in the right place to see things, but it's really Verónica's show. She has an excellent nose for a story as well as a supportive boss, and her network of contacts from her cast-off lovers to her influential lawyer father aid in her investigation. Verónica is an independent woman who lives life her own way, and the portrayal of her character is unflinchingly honest. The author even has her looking for a tampon in one scene, and I don't think I've ever read that in any other mystery I've picked up before. It was a pleasant surprise.

The Fragility of Bodies is an excellent mystery set in Buenos Aires and peopled by interesting characters. Unfortunately, for me, it was marred by too much graphic sex that didn't really seem to have all that much to do with the story. Those scenes, although numerous, don't last long, but if you're the type of reader who likes to wipe the steam off your glasses while you read a good mystery, I think this book will be a complete winner.