Blood Will Be Born by Gary Donnelly 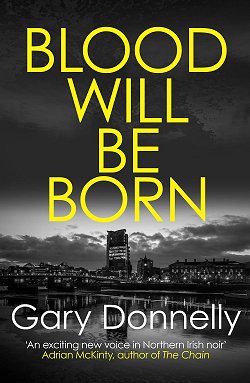 First Line: Nothing's as heavy as a dead body.

On loan from London's Metropolitan Police to the Police Service of Northern Ireland, Detective Inspector Owen Sheen is ostensibly in Belfast to work on the Serious Historical Offences Team. His real agenda? To find the man who planted the bomb that killed his brother. But before he can dig into the past, he's required to babysit Detective Constable Aoife McCusker on her first murder investigation.

The case rapidly slides into chaos. Will Sheen be able to put his personal agenda aside? Will McCusker keep her job long enough to ensure that her first case isn't her last?

Readers in the United States may be under the illusion that the Troubles in Northern Ireland ended simply because they don't highlight our news broadcasts anymore. In Blood Will Be Born, author Gary Donnelly shows us that it isn't true. There are too many still living from those days, too many who like their little crime syndicates, too many children who will never forget the wrongs done their families in times past.

The story is a steamroller with a stellar cast. John Fryer, a patient in a psychiatric hospital who is tortured by a beast he calls The Moley. Christopher Moore, a young man who should be in a psychiatric hospital but is free to begin a bloodthirsty rampage. Cecil Moore, a crime boss who enjoys his position and doesn't really want the past forgotten because it's what gave him his standing in the community. It's an excellent cast of bad guys, but the good guys are even better.

DI Owen Sheen, part of the Murder Squad of London's Metropolitan Police, has secured a three-month break to work on the Serious Historical Offences Team, a move which he thinks will be the perfect cover for him to find the man who killed his beloved brother (and nearly killed him). Whenever he and his partner stumble across a clue that could be related to his personal quest, Sheen tends to get tunnel vision, and readers really don't know if he's going to go off the rails or not. His partner, DC Aoife (EE-fuh) McCusker, is brand new to the Serious Crimes squad and eager to make a good impression. She's sharp and observant, and it's obvious that she's going to make an excellent detective, but she's got some baggage that could easily ruin her career. (In fact, it's Aoife's baggage that raised the one annoying little question in my mind that won't go away. Her blackmailer had plenty of time to carry through with his threat. Why didn't he?)

Blood Will Be Born moves from one point of view to another as the story progresses, letting readers know what's going on in the characters' minds, but we're still kept guessing to the end. With this high-powered start to a new series, I'm certainly looking forward to the next book.