The Vanished Child by M.J. Lee 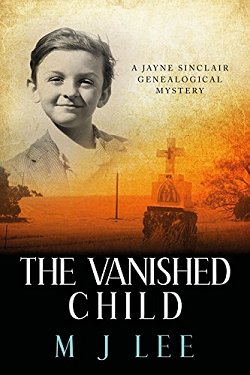 First Line: The backs of his hands were raw and red, arms exhausted and all his strength gone.

Jayne Sinclair's genealogy business is experiencing a slow period, which she needs in order to recharge her batteries, but when her new stepmother learns that she has a brother she never knew about, Jayne agrees to use her skills in an attempt to find out what happened.

As she lay dying, Freda Duckworth confessed to her daughter that she'd given birth to an illegitimate child in 1944 and temporarily placed him in a children's home. When she returned later to bring him home, he'd vanished and no one would help her find him.

What happened to the child? Why did he disappear? Where did he go? These are questions that Jayne Sinclair is going to try her best to answer.

M.J. Lee's Jayne Sinclair Genealogical Mystery series gets better with each book. Each is written so that you can read it as a standalone, but I've enjoyed working my way through the series in order. Jayne is a former police officer in Manchester, England, and her experience in law enforcement helps her repeatedly in the series, although I was certainly glad to see that she got to take a break from any derring-do in The Vanished Child (which is realistic, eh?).

I know that the covers of books should have nothing to do with a review, but I just have to say that the photograph of the little boy on the cover of this book is perfect. He looks bright and funny and mischievous-- and I just want to wrap him up in a big hug. The further into The Vanished Child I got, I found myself looking at that photo and asking, "How could they do this to you?"

There are those who read only non-fiction books in the belief that fiction has no knowledge to offer. I've lost track of the knowledge I've gained by reading fiction. In Lee's book, I learned about the child migrants, the 130,000 children who, between 1869 and the end of the 1960s, were sent by the UK to its former colonies. Some of the children were as young as four, and that 130,000 is an educated guess; no one really knows how many children were labeled as coming from problem families or single-parent families, or as illegitimate or abandoned and then loaded on ships and taken to far-flung places like Canada and Australia.

As all of the Jayne Sinclair books do, readers are treated to a dual timeline story. One timeline is the present day as we see what Jayne has to do to find information on a little boy named Harry. The second timeline begins in the 1950s, and it's all about Harry. Together, these timelines form a story that engages the mind and the heart. Don't be surprised if you are amazed at what you learn, and it might be a good idea to have a handkerchief on hand as well.

The Vanished Child is a wonderful piece of storytelling, and if you haven't read any of the books, I hope that you'll at least pick up this one and give it a try. You might just find yourself looking up all the others.