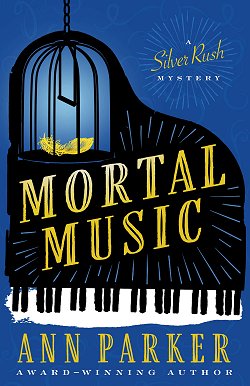 First Line: There had been occasions in the past when Inez Stannert had looked a man-- and even, once, a woman-- straight in the eye and felt justified in pulling the trigger.

The last thing Inez Stannert wants to do is be diva Theia Carrington Drake's accompanist for her last appearances on the stage during San Francisco's holiday season, but her music store is floundering and she needs the money. Besides, not only will she be earning badly needed extra cash, but the exposure should also bring new (and wealthy) customers to the store.

Unfortunately, the whole experience is a struggle. The singer is almost impossibly demanding, and unknown threats seem to be stalking her. It's not long before Inez realizes that there is a murderer stalking the city's opera halls, and it's only a matter of time before Theia is his next victim. Together, she and private investigator Wolter Roeland de Bruijn will have to catch a killer before Theia's voice is silenced permanently.

Ann Parker's historical Silver Rush mysteries have been a joy to read from the very first book, Silver Lies. Inez Stannert is a strong, intelligent, unconventional woman readers first met as an owner of a popular saloon in mining boomtown Leadville, Colorado. She's divorced her unfaithful conman husband and been forced to give her infant son to a family member to raise. Looking for a fresh start, she's moved to San Francisco with her young ward Antonia and opened a music store.

Readers always learn things when they pick up a Silver Rush mystery. In this year of 1881, Parker seamlessly weaves in facts about local San Francisco landmarks, music, the Comstock Lode, and the plights of African-Americans as well as dressmakers and other businesswomen.

As Mortal Music opens, Inez's young (and extremely headstrong) ward Antonia is bundled off to spend the holidays with the co-owner of the music store. I wondered about that because the give-and-take between these two strong-minded and independent souls often leads to laughter and plenty of headshaking on my part. However, it didn't take me long to realize why Antonia was shuffled off stage left. There's no way in the world Inez could deal with Antonia AND Theia Carrington Drake at the same time. She would've been driven berserk.

The private investigator de Bruijn adds quite a bit to the story. His ability to investigate things Inez isn't able to is important, but even more important is the dynamic between the two. There's a growing attraction there even though de Bruijn is having a difficult time dealing with Inez's personality. She's just not the usual sort of woman he runs across. She's more liable to pull out her revolver and shoot someone assaulting her instead of screaming for help.

Mortal Music is slow-paced and probably could have used a bit more editing to tighten up the story, and I found whodunit to be rather easy to deduce, but I didn't much care. There's just something about Inez Stannert and the world that Ann Parker creates that gives me so much pleasure that I'm willing to overlook a small bump or two along my reading road. If you enjoy historical mysteries and haven't read a Silver Rush book, I highly recommend the series and suggest that you begin with the first book, Silver Lies. If you're already a fan, be prepared to sink into this story with a happy sigh of anticipation.