The Case of the Reincarnated Client by Tarquin Hall 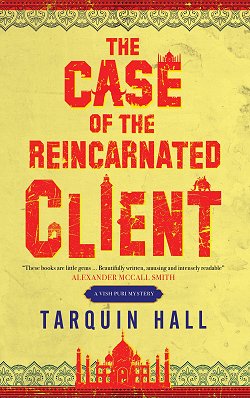 First Line: Vish Puri tried taking a deep breath to calm his nerves, just as Dr. Mohan had advised him to do during times of stress.

When Mummy-ji brings her son, private investigator Vish Puri, a case, he wishes she'd just leave her untrained, unprofessional nose out of his business. When he finds out that the case concerns a woman who claims to be Riya Kaur, a wife and mother who vanished during the bloody anti-Sikh riots of 1984, Puri thinks his Mummy-ji has lost her mind. He's got his hands full with an irate matrimonial client, but his mother insists he takes on the case.

The case of Riya Kaur was originally his father's, so Puri's sense of duty means that he will at least take a look at the police file. When he does, it's obvious that some kind of cover-up occurred, and that's enough to get the New Delhi private detective in an (unwilling) alliance with his mother to find the truth.

I enjoy this series so much that I had to go to Flavors of India to eat onion bhajis and lamb biryani afterward-- especially since it's been a few years since the last Vish Puri mystery, and The Case of the Reincarnated Client met and exceeded all my expectations. You can enjoy this series for the mouth-watering food (I'd never tried it until I made Vish Puri's acquaintance) or the (often) laugh-out-loud humor or all the things you can learn about both modern-day and historical India or the interactions between the marvelous characters... or you can just enjoy the excellent mysteries. But when you can combine all of these into one series or one book, it's magic.

The humor comes into play when Puri faces the possible demise of his beloved car, but it is also scattered throughout the story. But everything isn't all slapstick and laughs. The author can also make you furious or make you want to cry. The main mystery involves a woman who disappeared during the terrible riots following Indira Gandhi's assassination and justice is the major theme-- both of obtaining it for Riya Kaur and for its total absence in the wake of those riots.

India's demonetization also brings forth another element of mystery, and while Puri is traveling around the city to keep up with all his cases, readers experience New Delhi's pollution. So much of modern Indian life is explored here that I want to talk about it all-- and I know that I can't because I want you to read this book. It's all seamlessly woven into the story in such a way that you can almost feel as though you're actually there as you read. Perfect for armchair travelers, eh?

And The Case of the Reincarnated Client is also perfect for armchair sleuths. Can justice be brought to a money launderer and to Riya Kaur? Can an irate matrimonial client be made happy and forget to file a lawsuit? If anyone can do all this, it's Vish Puri. Fans of this series, rejoice. Vish is back! Those of you new to the series, I envy you. You have so much good reading ahead of you!