I Will Have Vengeance by Maurizio de Giovanni 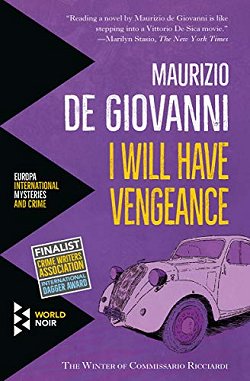 First Line: The dead child was standing motionless at the intersection between Santa Teresa and the museum.

Some would say Commissario Ricciardi's ability is a gift. Others would say it's a curse. He can see the final seconds in the lives of victims of violent deaths, and this ability has made him one of the most successful homicide detectives in the Naples of Mussolini's Italy. But success comes at a high price. He drinks too much, he sleeps too little, and-- other than his loyal partner Brigadier Maione, he has no friends.

When a world-famous tenor, Maestro Amaldo Vezzi, is found murdered in his dressing room at Naples' San Carlo Theatre, Ricciardi is called in to investigate. Vezzi was a particular favorite of Il Duce himself, so Ricciardi's superiors are in a certified flap.

Ricciardi is a man who has let his rather gruesome ability separate him from the rest of the world. He's rich. He lives alone, or almost alone-- his old nanny lives in and takes care of him. His only moments of pleasure seem to be when he sits in his darkened room and watches a young woman sitting by her window embroidering in the lamplight.

There didn't seem to be much historical flavor to I Will Have Vengeance other than mentioning Mussolini once in a while, but it was interesting to see how Ricciardi solved the crime. Yes, he does see the final seconds of Vezzi the tenor's life, so he does know who killed him, but that's not going to stand up in a court of law. He has to very carefully backtrack and interview countless people before he can declare the crime solved.

The mystery is an excellent one that I did enjoy following, but the characters all left me cold. Perhaps this reaction is due to the translation? I'm not sure. But one thing that I am sure of is that I doubt I'll be reading further in the series.