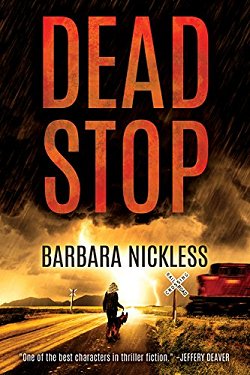 First Line: Her husband brought home little from the war.

When a woman is murdered on the train tracks and a child goes missing, Special Agent Sydney Parnell fears that she really isn't ready for another investigation since she hasn't fully recovered from a violent confrontation five months before. But she also knows that she's the only one who can lead the hunt for the child and the killer.

The Denver PD and the FBI chase their own tails, but Parnell follows a single cryptic clue that was left behind at the crime scene.

While the Denver area is being hammered by a series of thunderstorms that threaten massive flooding, Parnell and her K9 partner Clyde find themselves following a trail of murder that stretches back thirty years-- all to rescue a little girl and to catch a killer with a long memory.

Like the first book in the series, Blood on the Tracks, Dead Stop kept me enthralled from first page to last. The fast-paced story, the multi-faceted main character, and the information I learned along the way combined for a perfect read.

Among the things I learned? A bit of Colorado history, that Silly String isn't just for making messes, and bits and pieces of railroad lore and procedures. Don't mind me, trains click-clacking down the tracks lulled me to sleep as a child, and the book isn't chockful of railroad trivia if that's not really your thing. But all these things add depth to the setting and helped put me right in the middle of the action.

Dead Stop has an excellent mystery. I loved how all the various threads were woven together and how Parnell teased out all the clues. And the ending had my heart in my throat.

But the characters are what make the story work. FBI Special Agent "Mad Mac" McConnell worked well with Parnell, and as bits of her history were shared, I could see why McConnell was such a strong, interesting character. But it's ex-Marine Sydney Rose Parnell and her inherited ex-war dog Clyde who got most of the attention, as well they should. Both fought in Iraq. Clyde's handler was the love of Parnell's life, and she inherited Clyde when her lover was killed. Both woman and dog suffer from PTSD, and although they are a formidable team when they're on the job, it's not all about the job. This partnership runs deep because they both look to each other for emotional support, too.

The quotes that begin each chapter are from Parnell's classwork, therapy sessions, and her personal journal, and they shed light on the type of person she is. One of the best things this book-- and the series-- does is to help illustrate what soldiers returning from war go through.

I enjoy the author's blend of setting, story, and character so much that I'm really looking forward to the next book in the series. I hope you'll give these books a try, and I do recommend that you begin with the first book, Blood on the Tracks.