Black Out by John Lawton 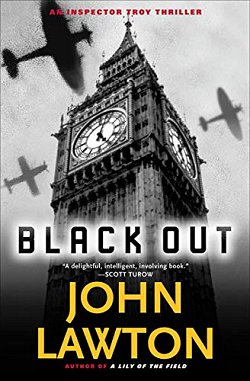 It's 1944, and the Luftwaffe is making its final assault on an already battered London. When children playing in an East End bomb site discover a severed arm and call the police, Scotland Yard's Detective Sergeant Frederick Troy knows the arm isn't the work of a bomb.

Troy manages to link the arm to the disappearance of a refugee scientist from Nazi Germany, and that's when America's newest intelligence agency, the OSS, decides to get involved. Troy soon finds himself up to his eyebrows in secrets, corruption, and mysterious women as he tries to solve this case.

If I'd paid a little more attention to the clues planted in the synopsis of this book, I would not have purchased it-- but more on that a little later.

Black Out covers 1944-1948 in London, and as I have been enjoying a few mysteries set in that same time period, I decided to see what this book was all about. For me, there was very little real historical flavor to the setting outside of blackout curtains, potholes in the roads, and having the occasional bomb land somewhere nearby. The major reason why I should have paid more attention to the synopsis is that I do not care for spy thrillers, and that is precisely what Black Out turned out to be. Paraphrasing the words of one of the characters: Just give me an old-fashioned murder any day, thank you very much.

However, it wasn't just the spy game element of the book that left me cold; the characters did, too. The two token women, Tosca and Brack, played their jolly nymphomaniac and tall, cool femme fatale roles to perfection, but nothing they did really surprised me. Constable Wildeve was my favorite of the lot, and he deserved a drawerful of commendations for putting up with Sergeant Troy, who seemed to believe that the young man was psychic.

Troy is the son of a titled Russian émigré, and it's a combination of this background coupled with how his schoolmates and others have reacted to it that has made him distrustful. He holds himself apart and does quite a good job of behaving like a cold fish. Troy also is the sort of police officer that I don't particularly care for. He's all about the chase, regardless of whom he puts at risk. It's not so bad when the only person in danger is himself, but he willfully throws other people under the bus, too. I like my coppers with a bit more compassion because it isn't just about the chase.

So... my opinion of Black Out isn't all that great. I can see that it is fast-paced and well-written, and it does have a story that held my interest, but Troy just isn't my sort of policeman. Keep in mind that your mileage may certainly vary. Now I just have to remind myself to pay closer attention to those synopses!