The Evolution of a Library

One of the things I am most appreciative of this Thanksgiving Day is the fact that I literally grew up in a library. I recently came across some photos of the small farm town where I grew up. The website features photos taken from 1889 to 1940, and I thought I would share a few with you.

Ever wondered what a village movie theater looked like in the 1930s? Take a look at the Lyric Theater on West Main Street in Moweaqua, Illinois. 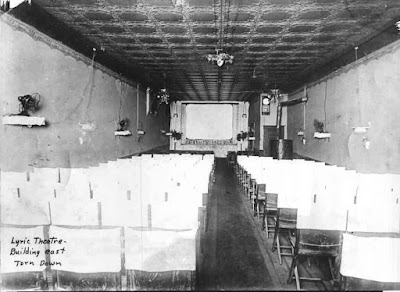 This is where Mom went to see "Gone With the Wind" as a little girl in 1939. And in case you're wondering about the size of my small farm town, its population has remained rather stable over the years. It's somewhere in the vicinity of 1,900 now-- 1800 when I lived there. 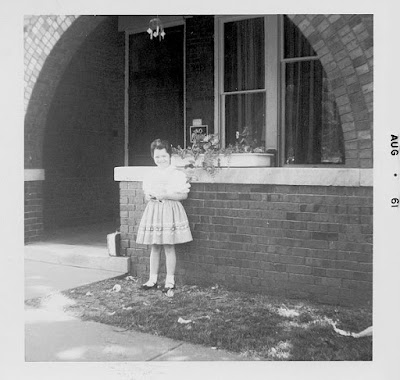 This is me when I was a first-grader, standing in front of the apartment Mom and I lived in until I was eight years old. Pay particular attention to the shape of the archway. You'll need it for the next photo. 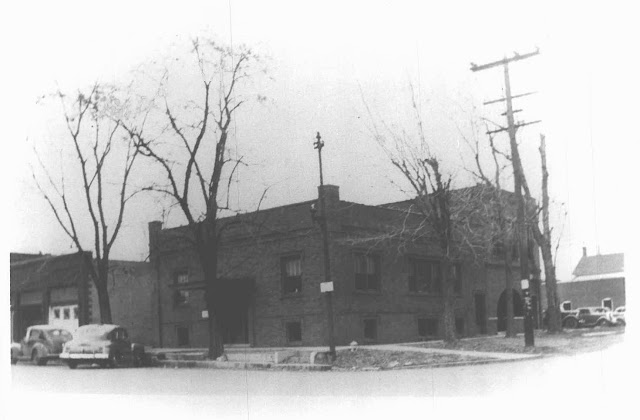 Hopefully, I'm not playing fast and loose with the blog margins here, but I'm trying to get a photo where you don't have to drag out a magnifying glass to see what I'm talking about. See that tallest power pole to the right in the background? Come forward a bit and you'll see that archway behind some trees. You've found our apartment again. The door just to the left of that archway was the back door to the dentist's office. Mom and I lost track of the number of times someone wanting to go in the dentist's office would come up on our porch instead, open the front door, take a couple of steps, open another door, and wind up in our big walk-in closet.

Now, walk your eyes around the corner past the front of the dentist's office. There's a small empty lot, then a big white door with a row of three windows in it. See it? That's the fire station. 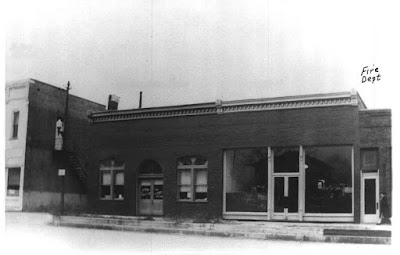 In this photograph, you can see where someone has written in "Fire Dept" above a white door on the far right. That goes into the fire station. The big white door in the preceding photo is for the fire trucks. Now... just to the left of the fire station door is a huge expanse of plate glass divided by a door. Walk into that door, and you're in a tiny vestibule with doors to the left and right. The area behind the plate-glass window to the left housed the village water department and was where the mayor and other officials met. The plate-glass and (inside) door to the right? That was the library where Mom was the librarian and I was her assistant (unpaid until I turned sixteen).

Mom's desk was right in front of that window, and the sun would come shining in and try to bake her alive. It took her a long time until she convinced the library board (the first one she dealt with was extremely... frugal... with money) that she needed some sort of blinds in that window. The other major fact about this building was that the back half of it was held up by a huge jack in the basement beneath. I kid you not.

If you're interested in reading about some of my memories of that library, you're more than welcome to take a look at my Library Memories, but now I want to show you how the Moweaqua Public Library has evolved into what it is today. Take a look at this! 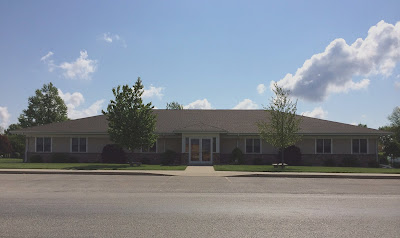 It's so much bigger than the old library that I find it hard to believe (and I'll bet there are no jacks holding up the floor either). Not only that but it has a nice big parking lot, too.

When Mom took over as librarian around 1960, the library had been allowed to stagnate. No one wanted to spend money on it, and most of the books on the shelves dated from 1920-1940. As a result, few people except diehard readers darkened its doorstep. When I think of all the back-breaking work Mom put in, and all the help she was given by a new forward-thinking library board with members who actually read books, I am so proud of her. Without a doubt, if not for the groundwork my mother and that library board put in, the Moweaqua Public Library would not be in this gorgeous new location.

Thanks to the Moweaqua Remembers website and the Moweaqua Public Library's Facebook page for the photos. They brought back so many memories!