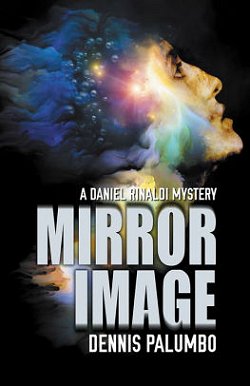 Dr. Daniel Rinaldi is a psychologist who specializes in the treatment of victims of violent crime. As a result, he's become a consultant for the Pittsburgh Police Department.

Rinaldi's patient, Keven Merrick, is a victim of violent crime. The troubled young man is desperate for a role model and a sense of identity. The role model Kevin has chosen is Daniel-- dressing like him, acting like him, even mirroring his appearance. Before Daniel can work with Kevin on this, he finds the young man brutally murdered. Both he and the police suspect that Daniel, not Kevin, was the intended target. And now the killer is coming after Rinaldi.

Feeling responsible for Kevin's death, Daniel is determined to solve the crime. What he isn't prepared for is all the secrets he will uncover along the way.

Palumbo infuses Mirror Image with a strong sense of place, and I certainly enjoyed his descriptions of Pittsburgh. Another strength is his pithy one-line descriptions of characters that often made me laugh.

Daniel Rinaldi is a strong character whose major "fault" seems to be caring too much for the welfare of others. He thinks nothing of putting himself in danger to protect someone else. As he says, "Justice and compassion. Everything else is just...talk." Throughout the book, Rinaldi provides excellent insight into both himself and the behavior of others.

Mirror Image is a strong mystery that deals with mental illness and how to make the real bad guy pay for his crimes. If there was any weakness to the story, it was Rinaldi's love interest and the-- to me-- unnecessary love scenes. It was also rather easy to identify one character's true identity. However, with those complaints out of the way, Dennis Palumbo has created a strong, sympathetic character that I enjoyed getting to know. I'm looking forward to another visit to Pittsburgh.