A Body in the Bookshop by Helen Cox 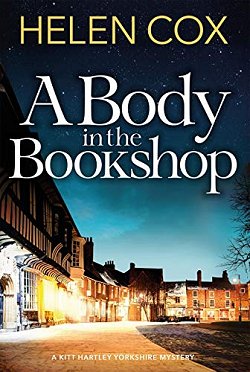 It's almost Christmas in York, but the season of goodwill seems to have skipped a few people. When Detective Sergeant Charlotte Banks is suspended on suspicion of assaulting a burglary suspect, it's obvious to librarian Kitt Hartley and her friend Evie Bowes that she's being framed... but why? Charlotte's boss's hands are tied due to police procedure, so it's up to Kitt and Evie to solve the mystery.

The first book in this series, Murder by the Minister, I thought a good mystery was slightly hampered by too much romance. I wondered what was going to happen in the second book. In a move that surprised me a bit, A Body in the Bookshop focuses on Kitt Hartley's friend, Evie Bowes, a shy woman who has been deeply affected by the events in the first book.

Is there romance in this book? Yes, there is, but it centers on the damaged Evie. Her dealings with both physical and emotional scars as well as her budding romance are dealt with great sensitivity, and I found it more appealing than Kitt's love life in the earlier book.

A Body in the Bookshop is a somewhat puzzling title since there is no body in the bookshop, but the mystery is a good one that contains some excellent misdirection. I also appreciate the fact that I'm getting a good "feel" for the city of York by reading Cox's books. The real problem for me with this series is that I'm not warming up to the characters, so if you're a character-driven reader like I am, you might want to take this into consideration.