The Service of the Dead by Candace Robb 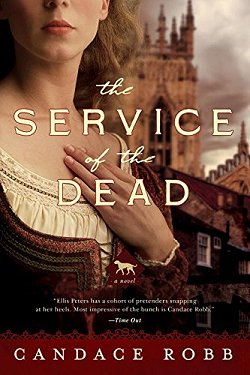 First Line: One moment Kate was laughing as Griselde called Matt back for yet another "final" instruction, and the next she was watching in horror as the young man stepped into the street, cried out, and fell beneath a runaway wagon.

It's 1399, and once again England is fighting over who is the rightful king. The city of York is filled with political unrest, and young Kate Clifford is trying to stay well away from it all. She has her hands full with trying to get out from under the crippling debt left by her late husband, as well as trying to care for his two illegitimate children who showed up unannounced on her doorstep.

One of the more lucrative businesses she has set up is a guest house where she discreetly rents out bedchambers to wealthy merchants and their mistresses when the rooms aren't needed by more lawful occupants. When a guest is murdered and his companion is nowhere to be found, everything that Kate has worked so hard for is in jeopardy. Before anyone else in town hears anything about this murder, Kate must solve the crime to save herself from ruin.

I have a friend who loves Robb's Owen Archer mysteries about a medieval spy for the Archbishop in Wales while I greatly enjoyed her Margaret Kerr series set in thirteenth-century Scotland. This author certainly knows how to write historical mysteries, and I looked forward to this first Kate Clifford mystery set in fourteenth-century York. Fortunately for those of you who don't love a lot of politics in your mysteries, Robb uses just enough of it to give a clearer understanding of what's going on without making readers' eyes glaze over.

I found Kate to be a strong, interesting, multi-faceted character. She grew up on the Borders in Cumbria where the Scots and the English are always fighting each other, so she's learned out to take care of herself with bow and arrow, battle-ax, or anything else that comes to hand. Although she loved her husband, his debts and illegitimate children have caused her to think differently of him, and she's actually enjoying the freedom of her widowhood to make her own decisions and build a life for herself that she can be proud of. When you add that she has good family connections that can help her out with pesky things like murder, her character gets better and better.

But it's not all about paying off debts and becoming wealthy for Kate. When she first had the chance to dismiss old servants who might be a bit slow or crippled with arthritis, she kept them on instead, finding useful work that they could do with pride. But she has brought on new servants who come from different walks of life and have a variety of very useful skills. Her attitude toward herself and others is also seen by how she ultimately treats an elderly tenant named Odo, who has let one of her properties go to wrack and ruin.

With a brother-in-law who's intent on stealing her inheritance and the Earl of Westmoreland's knight who looks at her with a gleam in his eye, Kate doesn't need any more stress if she's going to solve the murder in her guesthouse, and with the danger coming from so many different directions, this was an extremely difficult investigation for this particular armchair sleuth, which means...

Candace Robb has done it again, and I look forward with pleasure to reading the next books in this series. She is an author of historical mysteries who should not be missed.