The Beast in the Red Forest by Sam Eastland 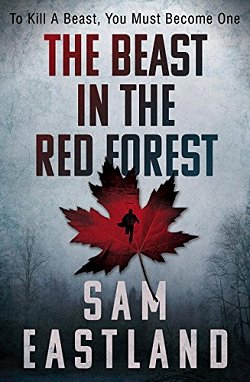 Although the charred body of Inspector Pekkala has been found at the site of an ambush, Stalin refuses to believe the man is dead. When Pekkala's assistant, Major Kirov, agrees, Kirov finds himself on the way into the heart of a wilderness where bands of partisans wage a brutal campaign against both Nazi invaders and the Red Army.

What Kirov doesn't know is that he's being led straight into a trap. He is not alone in searching for Pekkala, for a deadly killer is determined to make certain that the inspector is dead.

Sam Eastland's Inspector Pekkala series set in Stalinist Russia is another of my favorites, but I read it very slowly. Why? Because life in Russia during that time was so gray and grim and awful. But no matter how gray, grim, and awful it was, Eastland's stories are compelling. The Beast in the Red Forest is no exception.

From past books in the series, Inspector Pekkala has shown that he has an uncanny ability to stay alive. The character has almost mythical status. Who else could be Tsar Nicholas II's top investigator and survive to do the same job for Joseph Stalin? Pekkala's absolute honesty and relentlessness are two major reasons for his longevity, and throughout the series, Major Kirov has been learning from the master.

People aren't who they appear to be. Stalin, who has a love-hate relationship with regard to Pekkala, has more than one agenda. Others are trying to circumvent Stalin to ensure Pekkala's safety... there's a lot going on, and it makes for an engrossing story that's hard to put down.

There's also more than one narrative. The main action of the book takes place in 1944, but The Beast in the Red Forest begins with a letter from an American who's taking his family to Russia in the mid-1930s to work in a Ford Motor plant. The letters continue to break sporadically into the action in 1944. There are letters from Russian officials, from American ambassadors, from the American's wife, and as each one appears, readers wonder what in the world they have to do with the story in 1944. Then it all clicks into place and ratchets up the tension even more.

A compelling story peopled with strong characters in a vivid setting. I feel as though I'm living in Stalinist Russia as I read these books. Eastland adds humorous lines from time to time to lighten the mood, and he also describes the landscape in beautiful, poetic language, one of my favorites being the origin of the "Red Forest." There was also a surprise for me at the conclusion. I felt a bit sorry for Joseph Stalin at the very end of The Beast in the Red Forest, but before you think I've lost my mind, let me tell you something. I'd also feel sorry for a rabid skunk, but I wouldn't come anywhere near it, and I'd never turn my back on it.

This is a superb historical mystery series that I highly recommend. Give it a try!