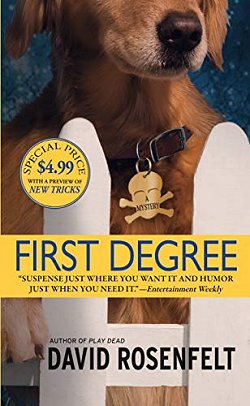 You just don't expect a man to waltz into your office and confess to murder, but that's exactly what happens to lawyer Andy Carpenter shortly after a police officer's body is found burned and decapitated. What's even more shocking is the person who becomes the number one suspect: the love of Andy's life, P.I. Laurie Collins, ex-cop and well-known enemy of the dead man.

Things are looking bleak during Laurie's trial. Andy is definitely going to have to pull the proverbial rabbit out of the hat in order to keep the woman he loves out of prison, but if anyone can do it, Andy can.

I don't know what kept me from this series for so long; it pushes all the right buttons for me. Nice, convoluted mystery, humor, dogs, and a wonderful cast of slightly oddball characters. I may not know what kept me from this series, but I do know that I intend to savor every single one. Who knows? There may be an Andy Carpenter Week (or two) in my future.

In this second book of the series, Andy is gathering together a first-rate "family." We're introduced to the very scary Marcus, whom Rosenfelt admitted he modeled after Robert B. Parker's Hawk in his Spenser series. Willie Miller, whom Andy defended in an earlier trial, makes himself at home with Andy and Laurie, and then there's the brilliant lawyer Kevin Randall who quit practicing because he couldn't face the possibility of either sending an innocent man to prison or letting a guilty man go free. And then there's Tara, the golden retriever that only seems to leave Andy's side... for Laurie's. This is ensemble casting at its best, ready and willing to expand for characters like Barry Leiter, a young man with a short role who punches a hole straight through your gut.

I would imagine that all true dog lovers like me roll their eyes whenever a normally well-behaved dog starts barking up a storm and its human ignores all the fuss. Well, that happens in First Degree, too, and I'm hoping that Andy learns to pay attention.

First Degree has a marvelous cast, laugh-out-loud humor, and a fun mystery with plenty of twists. As I read, I knew the identity of "Mr. Big," but I certainly hadn't filled in all the particulars. Now that I've read the first two books in the series, all I can say is that I'm looking forward to book three with a definite twinkle in my eye. Haven't made Andy Carpenter's acquaintance? There's no time like the present!