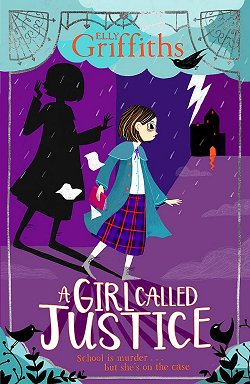 First Line: As soon as she saw the school, Justice Jones knew that it had potential for murder.

In October 1936 after the death of her mother, homeschooled Justice Jones finds herself bundled up and taken to the Highbury House Boarding School for the Daughters of Gentlefolk. The twelve-year-old finds no comfort in the fact that the place bears a resemblance to Dracula's castle or that the taxi driver muttered "good luck" when he left her at the doorstep. Inside, the place is freezing cold, Matron insists that her first name is Joan, the food is rubbish, and some of the girls are decidedly mean. But Justice knows that she must-- and will-- endure.

She even finds a thing or two to occupy her mind. Why does the school seem to be covering up the murder of a chamber maid? And why has the angelic-looking Rose made herself into Justice's nemesis? It's a tricky business trying to discover the truth about the maid while circumnavigating all the school rules, but with the help of a new friend or two, Justice is determined to get the job done-- even when a snowstorm cuts the school off from the rest of the world.

Since I am a long-time fan of Elly Griffiths' Ruth Galloway mysteries, how could I resist reading her first mystery for children? As you can see, I couldn't, and I found a delightful story that many adults are bound to enjoy.

Justice's voice pulled me right into the story, which includes blueprints of the school, her journal entries, and secret messages. Griffths has created a good mystery to solve, and I have to admit that when the villain was revealed, I couldn't believe that I missed the clues that had been planted along the way.

A Girl Called Justice isn't all about the mystery, however. Readers watch Justice as she learns how to exist as part of a group, and they may even laugh in sympathy as she discovers she has no skill at athletics. In addition, the setting is superb; I think I was frozen solid the entire time I was reading it-- which brings up a question. Why on earth (in so many British-set books that I've read in my lifetime) do people insist that living in icy conditions will "toughen a person up"? Especially when most of the students being toughened up were suffering horrible colds. It makes no sense to me.

But no matter. I loved the setting, the mystery, and the character of Justice Jones. I wouldn't be at all surprised if I read the next book in the series as well!