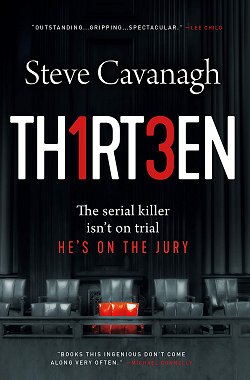 First Line: At ten after five on a raw December afternoon, Joshua Kane lay on a cardboard bed outside the Criminal Courts Building in Manhattan and thought about killing a man.

A popular actor is on trial for the murder of his actress wife and their head of security, and the media is drooling at the thought of all the juicy stories they'll be cranking out in the weeks to come.

There's one person who is determined to make sure Robert Solomon is sent to Death Row, and he wants a front-row seat while it happens. In fact, there's nothing that Joshua Kane won't do to ensure his wishes come true. You see... Joshua Kane is the real killer, and he's managed to find his way onto the jury of Solomon's trial.

There's only one small glimmer of hope for Bobby Solomon and that's his lawyer, former conman Eddie Flynn. For one thing, Eddie believes his client is innocent. For another, he thinks the real killer is closer than everyone thinks. What he doesn't realize is just how right he is.

When I was alerted to an upcoming appearance by Steve Cavanagh at my favorite independent bookstore, I was a bit puzzled by why the messenger was making a "big deal" in telling everyone. So I looked up Thirteen and was instantly blown away by the premise of the book. I remember the heady days of Thomas Harris and Red Dragon when the serial killer in that book had the power to change how I performed a routine task. Since those days, serial killers have become a bit of a snooze, very predictable, and something that's seldom added to my reading. With the synopsis of one book, Steve Cavanagh changed all that. I'd never heard of a serial killer smart enough and bold enough to force his way onto a jury just to further his plans.

The pace of Thirteen is fast and furious and never lets go. Alternating chapters let readers know what's in the minds of lawyer Eddie Flynn and serial killer Joshua Kane. This is the fourth Eddie Flynn mystery, but I immediately felt at home. No awkward "Who's he?" or "What's he talking about?" moments. Eddie has a Harry Bosch mentality-- everybody counts or nobody counts-- that made me immediately warm to him. He's also the type of lawyer who will not defend a person whom he believes is guilty. He's not in it for the big bucks. That former conman background means that he looks at things differently from most people, and that's certainly going to help him with Joshua Kane.

Joshua Kane is probably the most intelligent, twisted, and dedicated serial killer I've ever run across in crime fiction. Reading of the duel between Kane and Eddie Flynn was sheer pleasure. Something tells me I'm going to be backtracking and reading the earlier exploits of this conman-turned-lawyer. Thirteen is quite a ride, and I want more!