The White Shepherd by Annie Dalton 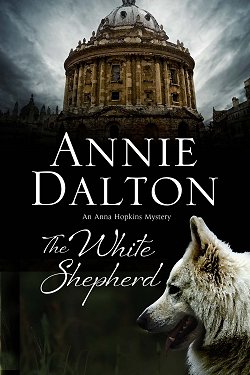 First Line: When Anna saw why her dog Bonnie had half-dragged her on to the bright-green spongy ground beyond the trees, her heart started to beat so fast that she was afraid she'd choke.

Every morning, Anna Hopkins walks her rescue dog, Bonnie, through Oxford's Port Meadow, but one morning the white shepherd uncovers a body in the undergrowth. It's a double shock for Anna because she knew the victim, a professional researcher who helped Anna trace Bonnie's original owner.

Police believe Naomi's death was a random act of violence, but Anna disagrees and teams up with fellow dog walkers Isadora Salzman and Tansy Lavelle to learn the truth. Little do the three realize how much danger they're putting themselves into.

The White Shepherd has an evocative Oxford setting and an extremely strong cast of characters. Anna is very self-contained and has purposely shut herself off from forming relationships due to severe trauma in her childhood. She realizes that she needs to make friends, but it certainly doesn't come naturally to her, as readers see through her attempts with fellow dog walkers Isadora and Tansy (who are every bit as interesting as Anna).

Anna has developed a good rapport with her white shepherd, Bonnie, who also has an unusual history, and there's even a budding romance or two for her. See what happens when she decides to come out of her shell?