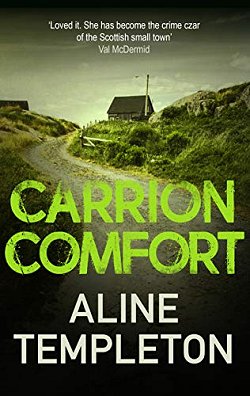 First Line: In high summer on the bleak northern coast of Scotland where the land at last gives way to the hungry seas, it is never completely dark.

When the body of a man is found in a derelict cottage, Detective Chief Inspector Kelso Strang is sent from Edinburgh to head the investigation. When he arrives in the village that's not far from Thurso, he finds that he'll be working with the over-eager constable Livvy Murray again, but even worse, he's been saddled with a lazy, offensive sergeant. Once he begins checking out the scene and talking with the locals, he finds even more.

Gabrielle thinks she's losing her mind. Still recovering from a nervous breakdown triggered by her beloved father's death and the loss of her unborn child, she's now suffering from bewildering and frightening losses of memory. The other major shareholder of her father's business is looking for any excuse to take over, so Gabrielle must act normally and not trust anyone.

With his boss wanting the case wrapped up as fast as possible, Strang keeps digging into the fractured minefield of local relationships and resentments. He's learned that one dead businessman has cast a very long shadow-- and he wants everything brought into the light.

When Aline Templeton began her Kelso Strang police procedural series with Human Face, I thought the concept was brilliant. Strang is the head of the Serious Rural Crimes Squad, which means this series will take readers into small towns and villages all over Scotland. Most of my favorite locations in Scotland are remote, so having a series like this created by one of my favorite writers makes my heart sing.

The area (not far from Thurso, which is way up on the north coast) and the locals come to life, and I was thrilled to hear that the creation of the North Coast 500 scenic route (touted as Scotland's Route 66) is bringing in needed tourism dollars. The setting and the mystery are tightly woven, atmospheric, and lend themselves to keeping the characters and readers off-balance.

Templeton's always good with setting and mystery, but it's her characters that are the shining stars in any of her books. Carrion Comfort is no exception. The quiet, almost secretive, Strang has his own domestic drama concerning his sister, and I'm looking forward to how that pans out in the next book. Readers also get to experience the on-going training of bright and pushy Livvy Murray, a young woman who must learn not to start forming theories before she's gathered the facts.

One fact that's brought home throughout the book is how thoroughly one man can affect the lives of so many others, even after his death. I was reminded time and again of an old Ingrid Bergman film as I read, but that's all I'm going to say about that in case there are other old movie buffs reading this. It may not be everyone else's cup of tea, but I absolutely love Templeton's characterizations because readers are allowed inside each person's mind. We see what they see, we hear their voices, we learn how they think. The way I see it, this is a gift for all armchair sleuths when it's in the hands of someone as talented as Templeton.

Carrion Comfort is another extremely enjoyable mystery from Templeton. I highly recommend both this Kelso Strang series and her previous Marjory Fleming police procedural series set in the southwest of Scotland. Both are wonderful.