Bad Day at the Vulture Club by Vaseem Khan 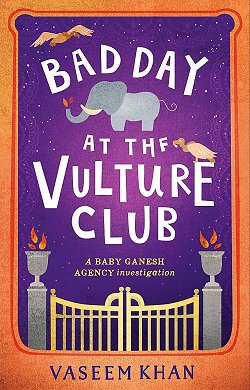 First Line: Perched on a rocky outcrop thrusting dramatically into the Arabian Sea halfway up the city's western flank, the Samundra Mahal-- the "palace by the sea"-- seemed to Inspector Ashwin Chopra (Retd) to encapsulate everything he had come to associate with the Parsees of Mumbai.

When prominent businessman Cyrus Zorabian is murdered on holy ground and his body dumped inside a Tower of Silence where the Parsee dead are consumed by vultures, his daughter is unconvinced that his death was a random killing. Enlisting the experience of retired police inspector Ashwin Chopra, she insists on knowing the truth.

The Parsees are among the oldest, most secretive, and most influential communities in Mumbai, India, and Chopra feels uneasy at entering this world of power and privilege, but he's soon plagued with doubts about the case, which is going to take him deep into the marriage of wealth and corruption that so often lies at the heart of his beloved city.

After the slapstick comedy of the last Baby Ganesh Agency mystery, Murder at the Grand Raj Palace, this latest book has a much more serious tone and is the best and tightest constructed mystery so far in the series. Although the tone is more serious, there are still scenes that gave me fits of the giggles, so those of you who prefer light-hearted mysteries, take note. I think one of my favorite chuckles was Khan's homage to Edgar Allan Poe with an injured vulture glaring at people from atop Chopra's bookcase.

The mystery in Bad Day at the Vulture Club kept me guessing, and Chopra, with all his years of police work, is an excellent investigator-- even if his baby elephant sidekick does get into mischief occasionally. In fact, Chopra has such a good reputation with many in the Mumbai police force that his contacts and goodwill there stand him in good stead.

One of the things I enjoy most about this series is the way the character of Chopra's wife, Poppy, has grown. Chopra has a one-track mind and focuses on his investigations while Poppy adds her social issues and causes to the mix. This makes Poppy a very important part of the series because what she's involved in really give readers a true feel for Mumbai-- armchair travel at its best. She and her mother are also gifted with some of Khan's wonderful sense of humor.

After reading Sujata Massey's two Perveen Mistry historical mysteries and now Bad Day at the Vulture Club, I feel that I'm getting to know the Parsees, a group that continues to play such an important part in Mumbai's past, present, and future. In addition, my appreciation of vultures has grown (they may be ugly but they are an important part of life on our planet), and my learning about the Poo2Loo movement (pun intended) has enriched my knowledge of one of the most fascinating countries in the world.

Yes, I highly recommend Vaseem Khan's Baby Ganesh Agency mysteries. Read them and you'll enjoy, learn, and laugh. It doesn't get much better than that.