Under the Cold Bright Lights by Garry Disher 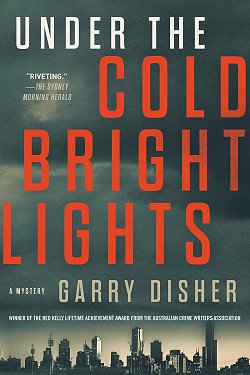 First Line: On a mild October morning near Pearcedale, southeast of Melbourne, a snake slid over the edge of a veranda on a shortcut to somewhere.

Young detectives think Alan Auhl is past his sell-by date, that he should have stayed in retirement, but Auhl could only twiddle his thumbs for five years before coming back to work on the cold case squad. The victims-- and their families-- have always meant a great deal to him, and so has justice.

He's taken on the case of John Elphick, whose daughters are still convinced that their father was murdered. So convinced that they've called Auhl every year on the anniversary of Elphick's death. And then there's the case concerning the skeleton that's just been found under a concrete slab. And what about the doctor who killed two wives and a girlfriend and managed not to leave a speck of evidence? To Alan Auhl, retirement is highly overrated.

From an opening scene that's equal parts scary and hilarious, Australian author Garry Disher yanked me right into Under the Cold Bright Lights and made me stay. I was a willing hostage, and it had everything to do with Alan Auhl.

Every day, he's faced with "Oi, Retread!" and "Don't forget your Zimmer frame," but it doesn't matter to him. The Job matters to him. Figuring out what happened, bringing justice to each case. All he wants to do is right wrongs. He lives in three-story "Chateau Auhl" with his daughter, his ex-wife, Cynthia the cat, his tenants, and a motley tide of waifs and strays that ebbs and flows depending on their needs. Young Claire Pascal has the popular opinion of Alan Auhl until she starts getting partnered up with him, and the development of their relationship is another strong element in this book.

Disher has a turn of phrase that I enjoy. Reading things like "...she was as ugly as a hatful of arseholes" or (describing his boss) "Hers was a face that could stare down a cavalry division" not only provoke vivid mental images but they also add needed levity to a very serious tale. Under the Cold Bright Lights is a nicely mixed bag of cases. Sometimes you know whodunit, sometimes you don't, but you always get the pleasure of watching how Auhl handles each one. Alan knows what evil can show itself under the glare of cold, bright lights, and he is not afraid.

All he's ever wanted to do is to right wrongs.

Read this book and savor it. It's a good'un that should not be missed.