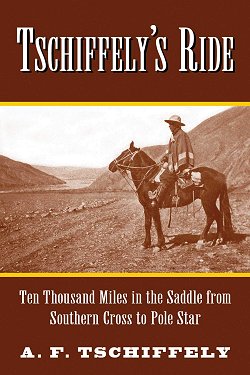 First Line: "Impossible!" "Absurd!" "The man's mad!" In this way many people stated their opinions, some publicly, some privately, when the news came out that somebody was going to attempt to ride from Buenos Aires to New York with two native Argentine horses.

In 1925, A. F. Tschiffely decided to follow his dream. He planned his route, purchased supplies, and readied his two Criollo horses, Mancha and Gato, and set off to ride from Buenos Aires, Argentina to New York City-- a journey of over ten thousand miles. Most thought he was crazy. Scarcely anyone thought he would make it. The memoir he wrote about his experiences is a fascinating read.

The care Tschiffely took of his horses-- often having fodder sent ahead so the horses would be able to eat and keep up their strength-- warms the heart. Mancha and Gato weren't just his modes of transportation, they were his friends on what was often a very lonely journey. Not only that, but they also saved his life more than once.

His story of dealing with tremendous obstacles, both natural and manmade, and his travel through areas torn apart by war are mesmerizing, but what impressed me the most about this memoir is the man Tschiffely himself. His personality came shining through in his writing.

He didn't hold back when he felt strongly about something, whether it be watching his first bullfight or government officials who were more concerned with obtaining bribes than doing their jobs. He took advantage of his travels to see many archaeological sites and other places of interest, and he made friends all along his route.

Although he encountered danger countless times during his two-and-a-half-year trek, there are also humorous anecdotes that made me smile: his reaction to getting asked the same questions over and over and how much sleep he lost due to all the celebrations being held in his (exhausted) honor that he had to attend being two.

Tschiffely's observations of nature and the landscapes through which he traveled were vivid. Many times I felt as though I'd saddled up my own horse and was accompanying him. If there was any single disappointment in reading his memoir, it was the fact that he glossed over the last few months traveling through the United States.  I completely agreed with the reasons why he did, but as a resident, I always like to learn visitors' reactions to my country.

Read it as the memoir of an incredible feat. Read it as a historical document of its day and age. Read it as an animal lover or as an adventure story aficionado. Tschiffely's Ride is the best sort of armchair travel, and I highly recommend it.