The Body in the Castle Well by Martin Walker 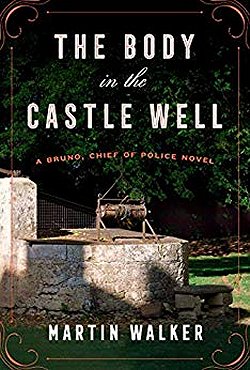 First Line: Bruno was still glowing from his morning canter at Pamela's riding school as he sipped his first coffee of the day at Fauquet's cafe and scanned the headlines of Sud Ouest.

The death of a young American art student is thought to be an accident, but Bruno, Chief of Police of the small village of St. Denis in the Périgord region of southern France, soon finds himself looking into the background of a hero of the French Resistance. Monsieur de Bourdeille has been a renowned art scholar for decades, but the young dead woman who had been studying with him thought some of the paintings that had gone on to very profitable sales had been falsely attributed by the elderly man. Who is correct? Bruno must find out.

Every fan of Martin Walker's Bruno Chief of Police mysteries knows how enjoyable they are. It's one of the best series for a true sense of place that I've ever read. When I put down a Bruno mystery, I find myself thinking with a French accent. Walker does this by infusing each book with the life, the breath, the soul of the Périgord region of France.

In essence, you have a strong mystery, populated with wonderful characters, that oozes France. If you're on a strict diet, stay away from these books; the descriptions of the food and its preparation are sublime. If you like learning things, this is a series for you. In The Body in the Castle Well, you're going to read about falconry, the French institution of confréries, a bit about Algiers, and World War II heroine, Josephine Baker.

I think the thing I enjoyed learning the most was about the "pupilles de la République":

"The pupilles were orphans of men and women in the police and military who had been killed in the line of duty. Their care, health, and education became the responsibility of the state. More recently, the status had been extended to the children of those killed by acts of terrorism."

The Body in the Castle Well is another enjoyable outing of my favorite French policeman. What? You have yet to read one of Martin Walker's Bruno Chief of Police mysteries? Quelle horreur! You must do something about this tout de suite! Oops. I still seem to be under Bruno's influence...