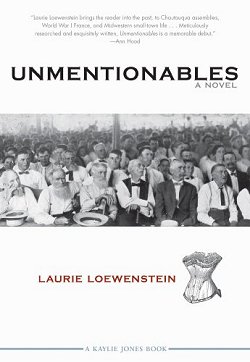 First Line: The breezes of Macomb County usually journeyed from the west, blowing past and moving quickly onward, for the county was just en route, not a final destination.

When Mrs. Marian Elloit Adams swept into the Chautauqua tent in the small town in Illinois on a sweltering August evening in 1917, little did she know that her life was about to change. Yes, her talk about the restrictive nature of women's undergarments scandalized many in the audience, but her mind was already on her next stop on the circuit. Then she fell off the stage and badly sprained her ankle. Like it or not, she was stuck in that backwater town for a week.

During that week, she would meet Jeannette Bellman, a young girl dying of tuberculosis; Deuce Garland, the local newspaperman; his daughter Helen, who's itching to move to Chicago; and Tula, a woman who's been in love with Deuce for years. And thus her life begins to change.

Loewenstein does a marvelous job of drawing readers right into the time period and the setting. It's 1917, America has entered World War I, women are struggling for equal rights, and the small town seems to be the backbone of the country. In Unmentionables, small towns are more like the last bastion of traditions and ideas that need to change: the place of women in the world, war, racism to name a few. What I liked is the fact that these topics were woven seamlessly into the narrative. There wasn't any preaching.

I picked up this book because I'd really enjoyed Loewenstein's Dust Bowl era mystery, Death of a Rainmaker. At the outset, I was lulled into thinking Unmentionables was going to be a light, enjoyable read of little consequence. I was very wrong. Each character has his or her own unmentionable secrets and desires, and each character is allowed to develop more fully than readers initially expect. Loewenstein's descriptive powers are wonderful: for example, I've tucked away the description of Mrs. Sieve to savor over and over again.

If you're in the mood for well-written historical fiction that gives you a vivid setting and characters whose interwoven lives make you think about life and love and hate and all sorts of things, I recommend you find a copy of Laurie Loewenstein's Unmentionables. It's a winner.