The Right Sort of Man by Allison Montclair 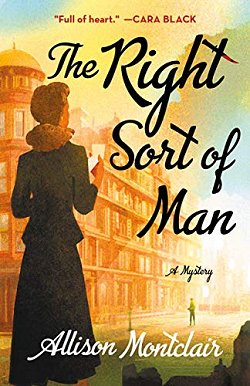 First Line: Tillie climbed the stairs from the Bond Street Station out to Davies Street, blinking in the afternoon light.

London is slowly recovering from World War II, and there are many men and women who want to put the war behind them and begin new, normal lives. This gave two women the idea to start a business: the Right Sort Marriage Bureau. Miss Iris Sparks is quick-witted and impulsive, with many things in her past that she can't talk about. Mrs. Gwendolyn Bainbridge is a widow with a young son who wants to achieve some independence from her aristocratic harridan of a mother-in-law. They're just the sort of women to make a success of the Right Sort Marriage Bureau. Except for one thing.

Their newest client, Tillie La Salle, is found murdered and the man arrested for the crime is the prospective husband Iris and Gwen had matched her with. The police are convinced they have their man. Iris and Gwen know they haven't. Not only are they determined to save an innocent man, they know they have to: the future of the Right Sort Marriage Bureau depends upon it.

The Right Sort of Man is a winner that I enjoyed from first page to last. I can see fans of Susan Elia MacNeal and Jacqueline Winspear falling for it, too. The period detail adds so much depth to the story. Trying to navigate through the streets of London with its bombed-out buildings, years of "make do and mend," ration coupons... Montclair draws you into this world with ease. The mystery is a strong one, too. The author kept me guessing, and a large piece of the puzzle involves the life of the dead woman, Tillie La Salle.

But the strongest part of the book is the team of Iris and Gwen. Gwen has led a rather sheltered life, and the death of her husband devastated her. As a result, her dragon of a mother-in-law usurped all the power in their relationship. But Gwen is not a timid little mouse. Now she is stronger and willing to do what it takes to regain control of her own life and the life of her little boy. On the other hand, Iris is quick, brave, and smart-- and since a lot of her recent past is gagged by the Official Secrets Act, you don't know for sure just what she's capable of or what she's going to do. They make a formidable pair, and the banter between them is a delight. (It reminds me a bit of Lady Hardcastle and her maid Florence in T.E. Kinsey's historical series.)