She Lies in Wait by Gytha Lodge 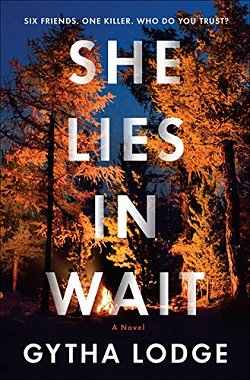 First Line: She made her skittering, sliding way down the riverbank.

The discovery of the body of a young girl reopens a missing persons case from 1983. Leading the investigation is Detective Chief Inspector Jonah Sheens, who went to school with the main suspects all those years ago. Aurora Jackson was fourteen and tagging along with her older sister and her sister's friends on a camping trip. When she disappeared, no one knew a thing, but her body was found in a location known only by those six friends. DCI Sheens is determined to get to the truth of what really happened that night, and he and his team are going to put in some very long hours before they do.

She Lies in Wait is the debut novel of Gytha Lodge, and it shows tons of promise. With the addition of chapters told from varying viewpoints in 1983, readers are taken deep into the group dynamics of the teenagers. In particular, Aurora's voice made me not only identify with her a bit but also mourn the loss of such a bright young soul. (In my opinion, Aurora and the newest member of Sheens' team, Detective Constable Hanson, are the best characters in the book.) Lodge has crafted a good story with plenty of misdirection and a list of suspects so annoying that it's difficult to choose the one most likely to be the killer. The pace does slow down from time to time, but a bit more editing can take care of things like that.

Although I did like the story, ultimately it was the characterization that let me down. For a character-driven reader like me, that's something that's extremely important. Hints throughout the first part of the book tell readers that DCI Jonah Sheens has a big secret, but when the reveal came, it fell flat. Sheens never did really pique my interest, and although his team does seem to have some interesting members, we're only told what they're like, they never show us by their actions. I would love to see them in action and learn more about them-- especially Lightman.

She Lies in Wait is a very good story, but it's told in a way that never really drew me in-- and if I can't care for the characters, it's very difficult for me to be enthusiastic about the book. But... this is a debut, so I'm interested in seeing where the second book will lead me.