A Picture of Murder by T. E. Kinsey 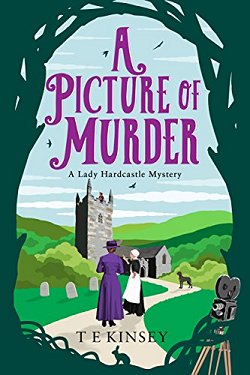 First Line: "Just hold it steady and try to keep your hand out of the shot," said Lady Hardcastle with only the tiniest hint of exasperation.

In late October 1909, Lady Hardcastle and her trusted maid, Florence Armstrong, are hosting a troupe of actors whose moving picture, The Witch's Downfall, is going to be shown in the village of Littleton Cotterell on Halloween. But each time The Witch's Downfall is shown, one of the troupe dies in a way that echoes the film. With the police at a loss, it's up to Lady Hardcastle and Florence to solve this very baffling mystery.

One of the many things I enjoy about T.E. Kinsey's Lady Hardcastle historical mystery series is how each book features something that was new and exciting at the turn of the twentieth century. In A Picture of Murder, it's the fledgling motion picture industry. In 1909, it's in a bit of a slump with many in the business believing that people living outside the cities will never be interested enough to spend their hard-earned money. The troupe of actors staying with Lady Hardcastle intends to prove this false by showing their film in Littleton Cotterell.

This fourth book in the series gets around to telling readers more of Lady Hardcastle and Florence's background-- and no wonder they're so good at this amateur sleuthing business! I look forward to learning even more about them as the series progresses. A Picture of Murder has a fiendishly clever plot that was so much fun to try to solve, especially as its basis was something that we are very familiar with today.

I'm also happy to report that the other things that have made me love this series are in fine fettle. The relationship between Lady Hardcastle and Florence is absolutely wonderful, and their dialogue is a feast for readers' funny bones. T.E. Kinsey's series is perfect when you want something light and fun, but a word of warning: Never let Lady Hardcastle drive you anywhere!