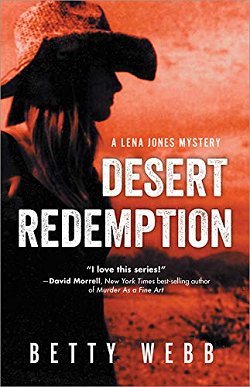 Scottsdale private investigator Lena Jones survived a tough childhood. Shot in the head at the age of four, she was left to die on a Phoenix street. She spent years in an abusive foster care system, never knowing who her parents were or why they didn't claim her.

The belief that her parents may have been members of a cult has always made Lena eye such organizations with a great deal of suspicion, so when the ex-wife of a close friend joins a "new thought" organization called Kanati, she begins to investigate. She uncovers two communes out in the Arizona desert, and they are polar opposites. The followers of EarthWay have a rigorous dietary regime that could threaten its inhabitants while the folk at Kanati are dining on four-star French cuisine.

When the emaciated bodies of women are found out on the desert in the Pima Indian Reservation, Lena has the feeling that they have something to do with EarthWay and Kanati-- and when she begins to have flashes of memory about her father and brother, she can't help but feel that she's close to getting the answers to everything... including her own past.

Betty Webb is a bit of a Jekyll-and-Hyde. She writes the light and humorous Gunn Zoo mysteries that are a delight to read, and she writes the much darker Lena Jones series, much of the material of which came from her years as a reporter. I love both series, but my heart has always been with Lena, partly because of how Webb depicts Arizona and the Phoenix metropolitan area. Webb's Lena Jones series has been consistently excellent, often dealing with important topics like polygamy, and because of her past, Lena is always on the side of children.

It hurt to read Desert Redemption knowing that it's the last book in the series. I haven't always agreed with what Lena has done, but she's become more than a friend through the years. Someone is always telling Lena "You can't do everything" to which she always replies, "But I can always try." You have to have a great deal of respect for someone like that. Everything she's done, everything she's suffered, everything she's fought for, has all led her to the final outcome of this book. Desert Redemption is a bone-deep, satisfying conclusion to this series-- and it contains The Best Last Sentence of a book or series ever. You can read it as a standalone, but I sincerely hope you don't cheat yourself. If you and Lena haven't met, start with Desert Noir.