After the Eclipse by Fran Dorricott 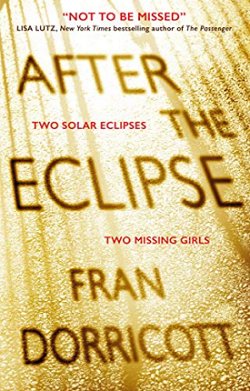 First Line: The day she became a local legend, Olive Warren did not do as she was told.

Sixteen years ago, journalist Cassie Warren's younger sister disappeared during a total eclipse. She was never seen again. Now Cassie is back home to take care of her grandmother who has dementia. When another girl goes missing just before the next eclipse, Cassie can't help but think that the two disappearances are related-- that whoever took Olive is still out there. But she needs to prove it, and prove it fast.

After the Eclipse was a pleasant read. I liked the character of Cassie as well as the author's writing style. However, I'm afraid that this is going to be faint praise.

I knew the identity of the abductor the first time the person was described. It had nothing to do with how the scene was written. Not at all. But after all the crime fiction I've read, sometimes you can just tell. I will say that the person's modus operandi was a bit different, which definitely added some spice to the ending of the book. Once I made that initial identification, though, much of the thrill in this thriller was gone, and I really didn't think that the story needed over four hundred pages to be told.

If you haven't read a lot of crime fiction, and you're in the mood for a pleasant read about an interesting main character, After the Eclipse may be just what the doctor ordered. Give it a try.