The Prisoner by Omar Shahid Hamid 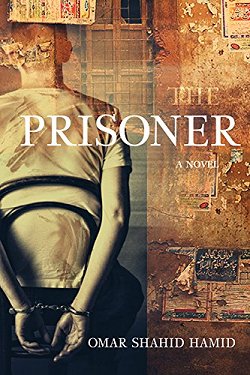 First Line: A cool breeze blew across the front courtyard of the prison, causing the solitary figure to shudder.

After his friend and partner Akbar Khan is imprisoned for a crime he didn't commit, Christian police officer Constantine D'Souza becomes the warden of a prison outside Karachi, Pakistan. D'Souza's decision was made more for the safety of his family and himself than because he no longer wanted to be on the police force. But when an American journalist is kidnapped and threatened with execution on Christmas Day days before a visit from the American president, D'Souza finds himself reluctantly working with the military-- and his old partner who's still in prison-- to track down the journalist.

It's not going to be easy. In Karachi police and government corruption on a massive scale is a way of life, political motives are never clear-- and the truth can kill you.

Omar Shahid Hamid's life rivals the adrenaline-fueled roller coaster of his novel, The Prisoner. He left Karachi, Pakistan when there were too many contracts on his life. His father was assassinated. Hamid served with the Karachi Police and was targeted by various terrorist groups. He was wounded in the line of duty, and his office was bombed by the Taliban in 2010. He definitely has the background to write this book.

There are two separate storylines in The Prisoner: the current hunt for the kidnapped journalist, and the backstory showing Constantine D'Souza and Akbar Khan working together as police officers and Khan's subsequent imprisonment for a crime he didn't commit. The pace at the beginning was a bit slow and took some time to get moving, and occasionally the transitions between the two stories were muddled and it took me a few seconds to get myself straightened out, but these certainly weren't major issues. Although the story held my attention captive until its climax, that wasn't the most important part of the book for me.

The part that kept rocking me back on my heels was the portrait of Karachi. The differences between rich and poor. The fact that the police and government are so corrupt that policemen often have to break the law in order to get the worst criminals in prison where they belong. And-- great merciful heaven-- that labyrinthine, almost incestuous system of politics, military, and police! Most officials seem to be in their positions for the number of bribes they can rake in. It's all about the money (hundreds upon hundreds of thousands of dollars) and has little to do with justice or doing what's right. It's all fascinating but not conducive to me journeying there any time soon.

I picked up The Prisoner because I wanted to know more about Pakistan. When I'd turned the last page, I knew that I'd gotten much more than I'd bargained for. What an experience, especially for a first book!