The Paragon Hotel by Lyndsay Faye 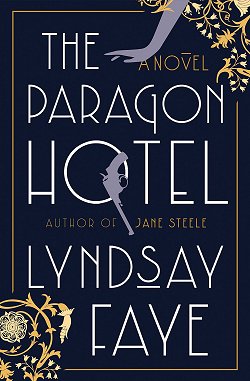 First Line: You're supposing that you hold in your hands a manuscript.

Suffering from an untended gunshot wound, former New York City resident Alice "Nobody" James is taken to Portland, Oregon's Paradise Hotel by Max, one of the black Pullman porters.

Her sanctuary turns out to be the only all-black hotel in the city, and its lodgers are none too happy about having a white woman on the premises. As she recuperates, she becomes acquainted with the residents and begins to understand why they dread her presence. The Ku Klux Klan has arrived in great numbers-- burning crosses, inciting violence, and brutalizing blacks. It's their presence that makes searching for a missing black child extremely difficult, but Alice insists on helping to find the boy.

The longer she stays, the more Alice learns. The Paragon Hotel is chockful of secrets, and nightclub singer Blossom Fontaine seems to be at the center of all of them.

In my travels east of the Mississippi, I'd often wondered at the proliferation of places called "Dew Drop Inn" or "Step Right Inn," mostly because there wasn't a thing about them that looked like an inn, hotel, motel, or bed-and-breakfast. All these places looked like bars or saloons to me. Well, thanks to Lyndsay Faye's The Paragon Hotel, I now know about the Raines law of 1896 and why so many bars and saloons changed their names. Other than this (and learning about Bayer's heroin tablets-- oh my), I found the book to be a mixed bag of blessings.

With sentences like "Losing a safe space...carves a canyon through a person," or "Watching like a sea captain's wife searching the shores after a storm," it's obvious that Faye certainly knows how to turn a memorable phrase. She also knows how to do her research on Harlem in New York City or the slang used in 1921 or Oregon's long association with racism. Memorable characters are also a forte. You've seldom met anyone like Alice James, who prefers to be called "Nobody," and the residents of the Paragon Hotel are fascinating, especially since they've all had to learn how to live a secretive life in a city (and state) where it is illegal for blacks to reside. You'd think that, with all those people in the hotel, you'd be constantly confused, but Faye effortlessly keeps them all straight in our minds.

The way the story is told is what tripped me up. This double-pronged tale is like two cats fighting in a bag. We have to be told Alice's backstory growing up poor in Harlem, and we have to be told the present-day story in Portland. It's too much. I could've done without all the backstory and having the sole focus be on the hotel and its residents. And the 1921 slang dialogue used throughout? While it's nice to know how many people spoke then, it was too much of a good thing even though I found none of it unintelligible. Like Alice's backstory, the slang served mainly to keep me from being drawn into the story-- and I really didn't want to be an outsider. Not at the Paragon Hotel.

There's an awful lot of good to be found in the pages of this book. If only I hadn't been put off by how the tale was put together. I seem to be in the minority with my opinion, so keep in mind that your mileage may definitely vary.