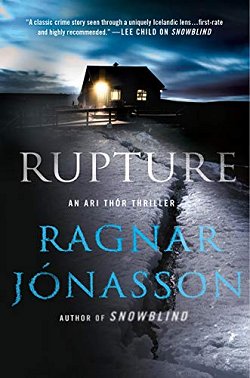 First Line: It had been an evening like any other, spent stretched out on the sofa.

Sometimes the past refuses to stay buried. With his town locked down in quarantine, young policeman Ari Thór has time to look into a 50-year-old case, but it's more difficult than he imagined it would be. He forgot that he's living in a place where secrets are a way of life and everyone is content not to know the truth. Ari Thór gets in touch with Ísrún, a news reporter in Reykjavik, for information. She's more than willing to help even though she's busy investigating a hit-and-run that takes a very sinister turn when a child goes missing in broad daylight.

Will Ari Thór and Ísrún be able to solve their mysteries?

I love how Ragnar Jónasson puts a story together. Perhaps it has something to do with those fourteen Agatha Christie novels he translated into Icelandic, but I think it has even more to do with his natural talent as a writer.

The characters in this Dark Iceland series are moving right along.  Ari Thór and his lady love Kristín seem to be growing up, but that is going to be tested in the future due to the actions of Ari Thór's superior officer. Speaking of superiors, Ísrún still has someone in the newsroom who would love to force her to quit, but she's having an easier time of it because she's learned a few tricks in how to deal with the situation.

Both mysteries-- the one in northern Iceland and the one in Reykjavik-- are strong stories. Ari Thór's is more deeply rooted in the past and is hampered by the fact that many of the people concerned are dead. Even more maddening are the people who want the past to remain in the past. For me, the mystery in Reykjavik affected me more. Emil's and Róbert's lives both changed when Emil's partner was attacked and left for dead. Two years later, the young woman finally dies. Emil's life is completely shattered while Róbert's has taken a dramatic turn for the better. As their story unfolds, Jónasson has us feel empathy for both men-- something that's not easy to do-- and the book is the stronger for it. After all, life is seldom simple.

As always, the weather and landscape of Iceland play a part in Rupture. Few authors are as talented as Jónasson in creating atmosphere. Combine that with strong, believable characters and a multi-layered story filled with unanswered questions and deep emotions, and you've got another winner from someone who has quickly become one of my favorite writers. I cannot recommend his books highly enough.