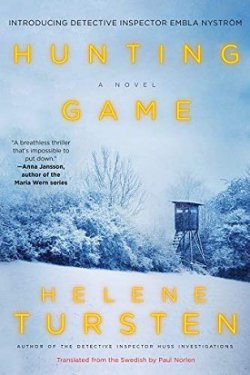 First Line: After nine rock-hard rounds, the sweat was dripping from both contestants and their movements were noticeably slower.

Twenty-eight-year-old Embla Nyström has learned to channel her anxious energy from her chronic nightmares into sports and into her position as Detective Inspector in the mobile police unit in Gothenburg, Sweden. Taking a vacation from her high-stress job, she is attending the annual moose hunt with her family and friends.

When Embla arrives at her uncle's cabin, she sees a new face: the handsome, newly-divorced Peter, who isn't welcomed by everyone in the hunting party. (He's unlucky number thirteen.) Sure enough, strange things begin to happen which all culminate in the disappearance of two hunters. Embla takes charge of the search, and one of the missing men is found floating facedown in a nearby lake. Now, with the help of local reinforcements, Embla has to begin looking into the pasts of her fellow hunters in order to find a killer.

For readers who are ardent opponents of hunting, I would suggest they give this book a miss. Since my grandfather was a hunter, I found this look into the moose hunting traditions of Sweden very interesting and a good backdrop to the story. I also loved Tursten's descriptions of the forest-- otherworldly, sometimes menacing, but always beautiful. She actually made me feel as though I were walking through those trees alongside Embla.

I was sad to see the author end her Irene Huss series, but at the same time, I looked forward to seeing something new. Fellow Irene Huss fans, never fear. I think you're going to like Embla. Huss was a prizewinning kickboxer; Nyström is a prizewinning boxer. Yes, both women certainly know how to take care of themselves. I was a bit anxious to see how tormented Nyström was by her nightmares-- sometimes I tire of psychologically damaged main characters and enjoy reading about someone who could be considered normal. Thankfully, Nyström isn't all that far off from normal.

Hunting Game tells us a bit about Embla's backstory and the cause of her nightmares, and I think that's going to add some interesting angles to future books in the series. I was a bit disappointed that I wasn't made to work very hard to deduce the identity of the killer, but that was just the mood I was in. This book is more of a whydunit than a whodunit, and the why certainly keeps the pages turning.

I may have been forced to say good-bye to Irene Huss, but I am looking forward to more encounters with Embla Nyström, and I think you will, too.