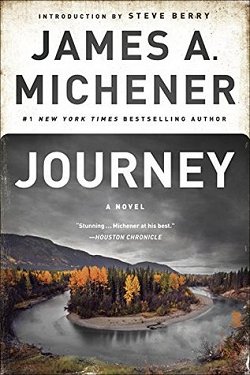 First Line: When on 17 July 1897 the steamship Portland docked at Seattle, bringing belated news and hard evidence that an enormously rich strike of gold had been made the summer before along the Klondike River on the extreme western border of Canada, the world was startled by a felicitous sentence scribbled in haste by an excited reporter who visited the ship.

Back in the day, I was a huge James Michener fan, and I thought I'd read all his books. Somehow or other, Journey slipped through the cracks, so I was eager to read it-- especially since it takes place during the Klondike Gold Rush during the late 1890s.

As Michener states at the end of the book, Journey was originally a chapter in his novel, Alaska, and it had to be cut from the final edition. He liked the story so much that he kept it, and it was published as a novel in 1989. (Only someone like Michener could cut one chapter from his book and have it be long enough for a 200-page novel!)

The story follows four English aristocrats and an Irish servant as they take the arduous overland route through Canada, chosen because the leader of the expedition hated America so much that he refused to let even his little toe cross the border into the U.S. In true Michener fashion, I was hooked by the story, the setting, and-- last but not least-- the characters. The U.S.-hating Lord Luton is a supreme example of his class and era, and it's a miracle my eyes didn't lock in the back of my head due to all the eye-rolling he caused me. It's hard for me not to get involved as I read a Michener novel, and Journey was no exception.

If you love historical fiction that not only teaches you about history but also tells a wonderful story, you can't go wrong by reading this book-- especially since it's several hundred pages shorter than a standard Michener novel. Who knows? You may get hooked and start reading those Michener "doorstops," too. The man certainly knew how to tell a multi-generational tale, and few authors can even come close.