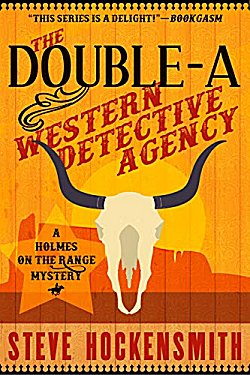 First Line: "You know when it ain't a good idea to play both sides off against the middle?" I asked my brother.

The dream is now a reality: the Amlingmeyer brothers are now professional detectives, and they are on their way to New Mexico on their first case. Sure there are a few flies in the ointment. Their partner, Colonel Crowe is about as charming as Old Red Amlingmeyer himself, and the colonel's daughter has insisted on tagging along with them, but the biggest fly is waiting for them at their destination.

Old Red, Big Red, and Diana Crowe have landed right in the middle of a range war, and the two cowboys-turned-detectives are expected to shoot it out with rustlers rather than solve a mystery. But the violence claims an unexpected victim, and this means the Amlingmeyers get to do some "deducifying" to find the killer.

It's been a long wait for this newest book in the Holmes on the Range series, and it couldn't come at a better time. I get more enjoyment from Old Red and Big Red Amlingmeyer than I do Conan Doyle's Holmes and Watson. (Hopefully, the Sherlockian purists won't invite me to a necktie party for saying that!)

This time around, Old Red is in a funk because Holmes has taken a header off Reichenbach Falls, so this case in New Mexico is just what he needs. When they arrive in DeBarge, they immediately know something's not right. The town is sharply divided along racial lines: all the white folk and their businesses are on one side of the main street, and everyone else is on the other. And it certainly doesn't set well when they learn that they've been hired to fight in a range war. As Sheriff Alf Hinkle tells them, "Where there's beeves, there's thieves." Old Red and Big Red still don't want any part of that, so it's a good thing that there is soon a mystery for them to solve. It's a good one, too-- one that I didn't figure out. I loved seeing how the Amlingmeyers managed to put things to rights.

Between the mystery that stumped me, the new characters, and the Amlingmeyers' new circumstances, there's a lot to enjoy in The Double-A Western Detective Agency-- and I haven't even mentioned Hockensmith's talent in giving a real feel for the Old West OR his wonderful sense of humor. These books are just plain fun, and I can't wait for the next one.

Historical Mystery, #6 Holmes on the Range mystery
Rating: A
Source: Purchased from Amazon.