Not of This Fold by Mette Ivie Harrison 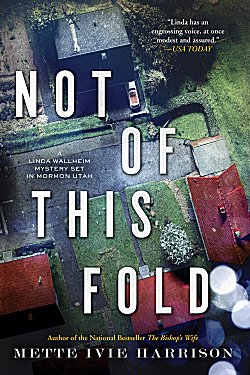 First Line: Every year on the Friday night before Halloween, we put on a ward Trunk or Treat in the gym for the whole neighborhood, Mormon and not.

All five of Linda Wallheim's sons have now flown the nest, and she has a lot of time on her hands. She's spent that time becoming close with one of the women in her ward, Gwen Farris, as well as worrying about the state of the country and of her openly gay youngest son who is on his mission in Boston.

Gwen is losing faith in the church, and it has a lot to do with the local "Spanish ward," which is comprised of both legal and undocumented immigrants. When her friend, Gabriela Gonzalez, is found strangled to death at a gas station, Gwen's feeling of guilt is overwhelming. Gabriela's last call was to her, and Gwen ignored it. When she decides the police aren't doing enough to find Gabriela's killer, she seeks justice herself, and Linda finds herself a reluctant partner who's mainly involved in order to keep her young friend out of harm's way.

I have a great deal of admiration for Mette Ivie Harrison. Yes, she's writing mysteries-- a genre that some literary snobs dismiss with a sniff-- but she's also testifying to the current state of her church, the Church of Jesus Christ of Latter Day Saints. It's the most even-handed, honest portrait of the Church I've read, and it's put Harrison in danger of being excommunicated. In this series, main character Linda Wallheim has dealt with various aspects of her religion as she solves crimes. A continuing issue in Not of This Fold is its stance on LGBT rights, as Linda's youngest son is openly gay and on a mission for the church. But the main issue here is the one of immigrants-- how they are seen by the church and how they are treated. I've probably made this book (and the series) sound as though they do nothing but preach religion, and they do not. NOt at all. However, the Mormon Church is the backdrop, the cultural setting, and to understand it a little is to be better able to unravel the mystery. For most readers, Not of This Fold will resemble reading a mystery set in a foreign country, and more knowledge is always a good thing.

Linda Wallheim is proud of her cooking and is picky about what she eats from other cooks' tables. But first and foremost, Linda is a mother. It's the primary gene in her DNA. With all her sons out of the house, she has found herself drawn to Gwen Farris, who is the age Linda's daughter would have been if she'd lived. Linda is aware of her maternal feelings, and she certainly needs those protective instincts because Gwen has never met an impulse she didn't give into. During the course of their investigation into Gabriela's death, Gwen constantly puts their lives in danger, and these TSTL (Too Stupid To Live) moments are infuriating. (Yes, I did have a difficult time with this character. With behavior like that, if Gwen does make it through the police academy, she's not going to live long when she gets out on the street.)

The mystery in Not of This Fold is first-rate, with plenty of red herrings, and it was so good to see Linda's husband, the eternal eye-roller and naysayer, getting involved. The added bonus of learning more about another culture makes Harrison's entire series one you won't want to miss. I know I don't.