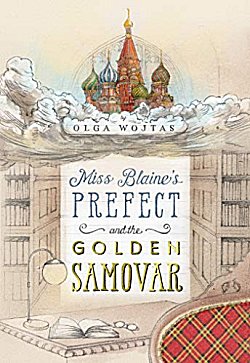 First Line: "Who shall I say is calling?"

Shona McGonagle is a self-satisfied middle-aged librarian in Edinburgh, Scotland who fully believes her education at the Marcia Blaine School for Girls has made her ready for anything-- be that an assault on the most repugnant book of all time (The Prime of Miss Jean Brodie, which casts scurrilous untruths about her beloved alma mater) or a trip to Tzarist Russia to prevent a gross miscarriage of romance, and-- in her spare time-- to see to it that only the right people get murdered. It's a tall order, but not for the former Head Girl from Miss Blaine's.

It's been a long time since I've wanted to throw a book against the wall. Normally I've stopped reading and chosen a different book long before that feeling arises. I just don't have time to waste on books that infuriate me.

But I did this time.

It might be because I was in the mood for a book that featured a little time travel, but something tells me that wasn't really it. How Shona got from present-day Edinburgh to Tzarist Russia was never explained, and how she conducted herself was one of the things that infuriated me the most. She was given absolutely no instructions when she arrived. She had a house and a servant at her disposal, a wardrobe full of appropriate attire as well as a pair of Doc Martins and a drawer filled with "multiway bras." She was told, more or less, that she would know what she was supposed to do when she saw it. I've been told that it's unladylike for a female to snort, but I did it anyway. More than once.

Shona proceeds to flounce about from place to place, spraying 21st-century opinions about like a machine gun. She quickly decides that a beautiful young heiress recently returned from exile needs to be married off to a beautiful young man and immediately begins working toward that goal. In almost no time at all, it seems that a tidal wave of elderly, filthy rich women begin falling down staircases and dying. Yes indeed, every time Shona and the beautiful young heiress visit, an old lady dies. Within a few pages, the identity of the killer is obvious, yet Shona never considers it for a second because... it's inconceivable that anyone who's so beautiful could be a homicidal maniac. (I think it's this assumption of hers that infuriated me the most.)

It didn't take me long to realize that I was undoubtedly supposed to read this book as a farce. That in itself is dangerous because farce is pretty hit-or-miss with me. Would my reaction have been more favorable if I had knowledge of The Prime of Miss Jean Brodie? Perhaps, but I'm not in the mood to take the time to find out. The real question is: why did I keep reading all the way to the bitter end if the book infuriated me? I did want to find out if Shona ever got any sort of message from headquarters, or if she ever learned what year it was there in Russia. (No and No.) The more I think about it, the more it occurs to me that I was actually enjoying the way the author was saying what she was saying-- and she does have a wonderful sense of humor. There you have it. It's all Olga Wojtas' fault.

The final question is: Do I ever want to meet Shona McGonagle again?

Not on your life.